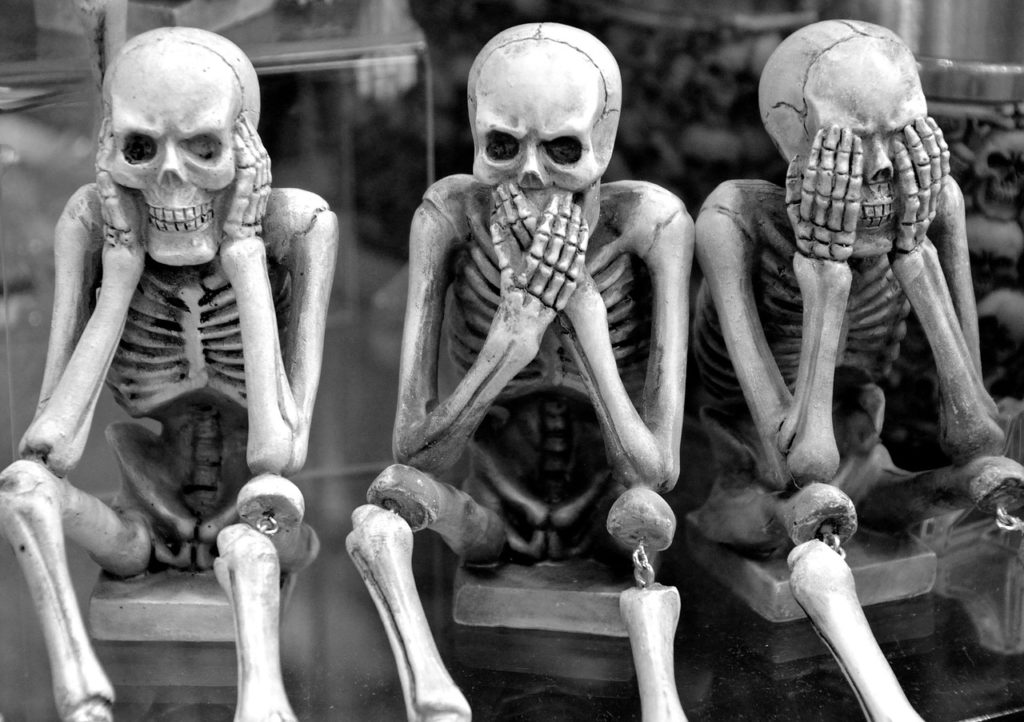 Owners of small companies would pay more tax under Labour – up to 45% more – but the Tories haven’t mentioned this.

Commenting on the Labour manifesto, John McDonnell said “In terms of income tax, the top 5% will pay a bit more, and actually not a great deal more. 95% of earners will not pay more in income tax rates, VAT or national insurance.” Click here

He said some people have told him they would be proud to pay more tax.

You can watch him say there would be no increase in income tax rates for those below £80,000: Click here

So if you earn less than £80,000, you won’t pay more tax, right? Not necessarily. What McDonnell was ignorant of, or lied about, is that dividends are subject to income tax, and he firmly proposes to increase the rates of tax on those.

So if you own a small company and take its earnings as dividends, you will pay up to 45% more tax, even if your share of the pre-tax profit is below £80,000.

This is not just because he would increase the rate of corporation tax from 19% to 21% by 2022/23.  The main reason is that he proposes to tax dividends on the same basis as salaries and wages. So he would abolish the £2,000 tax-free dividend allowance, and apply tax at 20% to the basic rate tranche instead of 7.5%. He would also increase the rates for the higher rate and additional rate tranches.

This would affect everyone who receives a dividend of course, but it would particularly affect the owners of small companies, who take much of their companies’ earnings in the form of dividends. They are advised to pay themselves a salary of only £8,632, because National Insurance contributions of 25.8% would be incurred on anything above that figure (a combination of employee and employer contributions).  The profit is subject to corporation tax, then the after-tax amount can be paid out as a dividend.

It is estimated that there are almost 2 million small companies in the UK.

Property 118 member Ros Beck drew McDonnell’s misleading claim to the attention of the Telegraph, newspaper which published an article on 30 November about it. Click here

Unfortunately, the people at the Telegraph who did the calculations for that article forgot to take account of corporation tax so their results were overstated by about £3,000.

Even so, it is bizarre that none of the Tory spokesmen have exposed the fact that the owners of small companies would pay more tax under Labour than they do now, and that some would pay almost half as much again.  It reminds me of the story about the dog that did not bark in the night because the thief was its master. Why are the Tories not making a noise about this? Do they assume that no owners of small companies vote Labour?

Dr Beck has managed to get CapX to cover the story again today, including a table with accurate figures: Click here

It does not show the percentage of net income that would be confiscated by McDonnell. This is shown in the complete table below:

Taxation of a one-person company in 2022/2023 under Labour’s proposals compared to today. 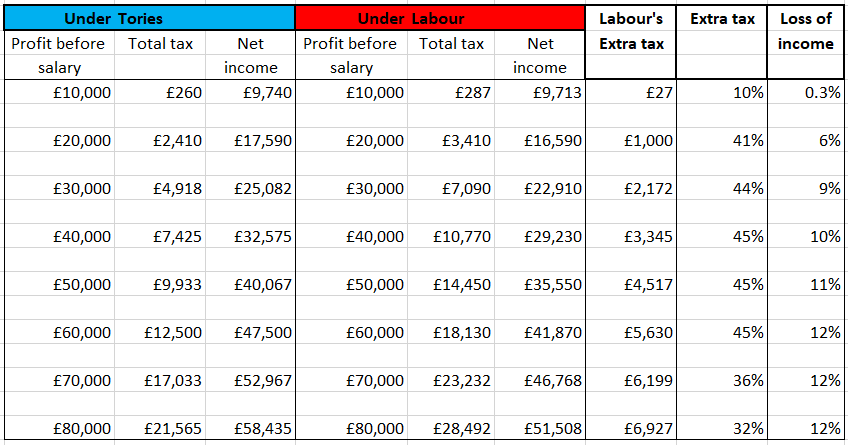 Self-employed people operating as limited companies that make between £60,000 and £80,000 profit would lose 12% of their net income – almost one-eighth.  Would that make you feel proud?  Or does it make you want to ask your Tory candidate why they are not publicising this?

I can’t believe the Tories are not making this a bigger point either and it must be because they:

a) Assume business owners already vote Tory as you say.
b) The general public do not have the attention span or inclination to understand.
c) It’s not on the simple “Get Brexit Done” message.
d) Like Landlords, Business owners are all corporate elite who they can’t be seen to help.

Something seems off with the math on this. I would love to know the equation used to work out. I might be wrong in this so please let me know if I have understood this incorrectly.

taking the first line of the table. Income of £10,000. Take out the £8,632 as salary, leaving £1,368. This is within the £2,000 allowance for dividends meaning there would be no tax to pay. Under the Labour scheme this would leave you in the personal allowance area, so again, no tax at all.

So I wonder if the reason the Tories have not been shouting from the rooftops is simple. The maths is wrong.

Reply to the comment left by The Forever Tenant at 09/12/2019 - 14:36
According to the article above "So he (McDonnell) would abolish the £2,000 tax-free dividend allowance, and apply tax at 20% to the basic rate tranche instead of 7.5%. "
I think the Tories are not shouting because the Red Idiot gave them some good ideas how to scoop more tax from small businesses.

I missed that line and also the part about corporation tax being taken before the dividend. That would explain where my maths was faulty.

But you are extremely quick off the mark with your comment, 15 minutes after it was published. You must be very interested in this forum, Forever Tenant.

Of the 186 seats, 66 are Labour-held, and the list also includes a remarkable 39 of all 59 Scottish seats. The self-employed could be the difference everywhere from some of the tightest marginals in the country, such as Southampton Itchen and North East Fife, to key Labour targets including Iain Duncan Smith’s Chingford and Woodford Green and Boris Johnson’s seat in Uxbridge.

In short, the self-employed could be vital for Labour this election.”
https://labourlist.org/2019/12/why-the-self-employed-are-vital-for-labour-in-this-election/

Do they know what McDonnell plans for those who operate as companies?

One of its tax recommendations, on digital page 16, is “Commit to no new tax rises or National Insurance Contribution (NIC) increases on the self-employed.”

Well, those self-employed people who are operating as limited companies will suffer considerable increases in tax if Old McDonnell gets into number 11 Downing Street.

The Tories have an open goal. Why don’t they shoot?

I do have an interest when it comes to the rental system and from what I have seen the people that inhabit this forum appear to be the most level headed on the internet. Its nice to have a reasoned discussion about an issue.

...why? Because under labour "it will happen" under Conservative "it may or may not happen"!

Reply to the comment left by Neil Patterson at 09/12/2019 - 14:21
On incorporation, if you had taken action to mitigate the effect of your no longer being able to offset all of your finance costs against your revenues either by incorporating or by including a corporate structure as part of your plans then you might well be affected by this. A left wing government run by either labour, the lib dems, the SNP or some kind of coalition of them probably wouldn't care much about this because they are after your assets anyway, one way or another.

But what's easy to overlook is that small businesses collectively are the biggest employer in the country, and they are also the greatest generator of new jobs: They are the "many" not the few and they are employing the "many"; if you hurt them, you hurt employment.