It got donations and legacies of £36.9 million, but spent £11.7 million on obtaining them.

It got £17.3 million for housing advice and support services from government departments and local authorities, and £2.8 million from the Big Lottery, making a total of £20.1 million.

This is analysed in a table on page 65 (digital page 33) of the annual accounts, under a humorous heading Housing Services: 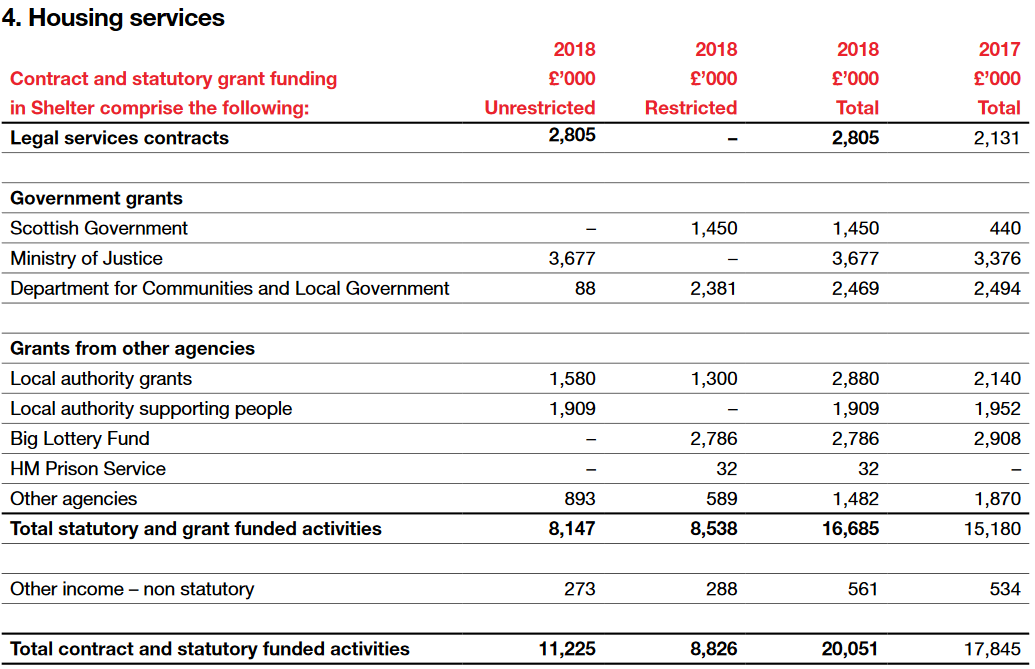 More detail is given on pages 80/81 (digital page 41).  Shelter got amounts totalling £1m from councils in each of the following cities: London, Sheffield and Birmingham.

However, Shelter spent £40.0 million providing ”housing” services.  You have to work this figure out for yourself – the cost is split into 6 categories, but there is no sub-total. It’s almost as if they don’t want you to know.

Shelter shops sold goods for a total of £9.0 million, but the staff working in them cost £3.6 million, and “other shop costs” were £4.8 million.  The net contribution was 532k, or 5.95% of sales – less than six pence in the pound from selling things that were given to them for nothing.

It got £1.2 million for training and publications which cost £0.9million. It also got £270k, from investments mainly, with a bit from office rental.

To summarise where the money went:

Cost of Shelter shops and their staff  £8.4m

Broadly speaking, the net donations and legacies of £25.2 million were spent as follows:

Half of the cost of so-called housing services  £20m

Housing anybody at all  £0

I understand that Shelter have been, and still are, taking over some LA funded contracts for the provision of tenancy support services to some categories of tenants. This seems to me to be a departure or change of direction from their more usual role of providing a location (or "Helpline") for tenants to come and seek advice. If these newly acquired contracts for "tenancy support services" are being funded by the local authorities, perhaps this could influence the impartiality of advice given to the tenants (or which tenants are provided with this tenancy support). - Time will tell.

If any landlord thinks that an attack on Shelter is going to help landlords, think again. Want to be seen as a nutjob? Attack a housing charity who have widespread public support and good PR.
The landlords who post on this board are not (I hope) the crooks who break the law, rip off tenants and provide substandard housing to the people Shelter gives advice to. By all means let us point out where Shelter are wrong and indeed that policies they support have the opposite effect but don't try to close them down.
This constant sniping that Shelter don't house people is pointless. That's not their job. They provide advice. It is like criticising an accountant for not being a business executive.
Sorry, Appalled Landlord, but this sort of post is likely to have the opposite effect from what you want. Property 118 may not have a wide enough audience for Shelter to bother to respond but I can just see how a story could be spun about heartless landlords who want to stop a charity helping the homeless. Wise up! Please.

Reply to the comment left by Ian Narbeth at 05/02/2019 - 10:29Have you noticed a slight shift in Shelter's attitude towards private landlords?
When was the last anti private landlord attack?
Coincidence?

Reply to the comment left by Ian Narbeth at 05/02/2019 - 10:29
Can you imagine a 'charity' called 'Feed the Homeless' receiving millions of taxpayers' money yet doesn't provide a single meal and does nothing more than run an advice line on where one can find their nearest Gregg's or McDonald's?

Shelter are the housing version of that.

Reply to Ian. With the greatest of respect, standing aside and not exposing shelter simply because they are a charity with a huge PR budget is wrong and immoral.
We only need look at what went on at other charities . As regards Shelter , educating the public about their 'raison d'etre' is the right thing to do. Such has been the ferocity of their attacks on the PRS, that we have been forced to fight back. When has there ever been the need anywhere to set up an organisation to oppose a charity ?. It is beyond belief that this situation has come about.
In summary, a message from the Alliance to Shelter. Change course or fight us. We are going nowhere.

Reply to the comment left by Ian Narbeth at 05/02/2019 - 10:29
Well said Ian but don't expect to change the hearts and minds of the anti Shelter brigade. They are on a mission, but as Larry has just said, they are going nowhere. And so, I suspect is their campaign

Shelters (internal) response would probably be ‘Ok, change course... or what?’, and that would be a good question.

I agree with Ian (and others have said it previously) that the 'anti Shelter' campaign is pointless. I was initially worried that it would reflect badly on the whole landlord community. That has not, however, been the case. Shelter has just laughed at, and subsequently ignored the Alliance and nobody takes any notice of the campaign.

Reply to the comment left by Annie Landlord at 05/02/2019 - 19:04Not completely convinced with that Annie.
Shelter is a highly tuned PR machine and I'm sure they follow most landlord websites. I think they have backed off private landlords quite a bit lately. I'm not saying that is in a large part due to the Alliance, just that is the way the wind is blowing anyway
-from many quarters.