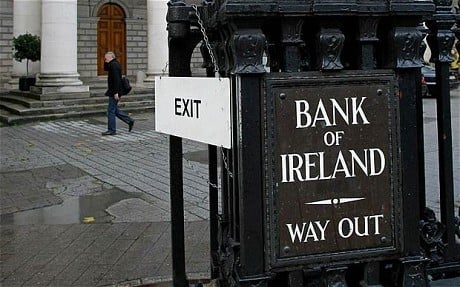 Landlords with Bank of Ireland buy to let loans can breathe a sigh of relief as mortgage interest rates are hiked by new owner the Nationwide.

The bank’s standard variable rates for residential mortgage borrowers are set to rise from 2.99%, to 3.99% in June and then to 4.49% in September, affecting around 100,000 customers.

However, buy to let loans are linked to a tracker rate and remain unaffected by the rise.

The mortgage books of the Bank of Ireland and subsidiary, the old building society Bristol & West, were taken over by the Nationwide as part of a rescue package when the Republic of Ireland’s banking system faced meltdown during the Eurozone debt crisis.

Instead of absorbing the new mortgage customers as part of the Nationwide, the building society decided to switch them to subsidiary The Mortgage Works (TMW), better known for self-cert loans (self-certification of income), buy to let and other home loans outside of the mainstream.

Industry insiders do not expect to see banks and building societies putting up their mortgage rates across the board, as the Halifax move is more about bringing their pricing in line with competitors rather than moving ahead of the field.

The Bank of England is keeping rates on hold at 0.5% for another month and wholesale market borrowing costs for banks have dropped from 1.09% to 1.04% in recent months.

The problem for landlords on standard variable rate borrowing is they are unlikely to find a cheaper alternative deal as mortgage rules have tightened up while house prices have dropped.

The rates going up to 4.99% is a joke as the me and others are strangling to live of wages that are way below food prices, petrol prices and now mortgage prices rising to rates that are killing people. The Bank of England are the only ones with the sense to keep it at 0.5%.
I don't see how me and my family are meant to keep living in our house. This may even split me and my family apart as that's what money does people.
ms.

I have just come out of a 5 year fixed rate mortgage with the Bank of Ireland and am currently on the standard variable rate.If landlords rates are linked to a tracker and exempt from the new interest hikes in July and September,how were we put on a fixed rate in the beginning ?

You need to dig out your mortgage offer letter and read it to see how the reversion rate was scheduled to be calculated at the end of the fixed rate period. It may say bank base rate or LIBOR + X or it may say something like the banks standard variable buy to let mortgage rate. Pray it's not the latter!

I am very jealous over my friend who I persuaded to get an offset  IO Abbey mortgage under old terms and conditions.
He's got 1% above BoE base rate for the term of the mortgage; I think he has 20 years left;  lucky so and so!!!

The time to breathe easy has gone. Just had a notice increasing mortgage rate from 2.25% to 4.99%.

I've had the letter to. They obviously want shot of us and I'm surprised they've taken so long but with the base rate still at 0.5% after 4 years, they can't take the pain any more.

Hi,spoke to BoiI today,they have already put up my rates to 4.99% . They state that they have the FSA backing. They say the "get out" clause is the fact that they gave 2 months warning if increased rates. I too am a previous Bristol and West Customer.I would also like to know if I should have received a windfall when BOI took over my 2 mortgages.

Advice would be welcomed

Liz
Do what I did and remortgage if you can. I just managed to get it done by 30 April.

I am closing comments on this thread, please see the related and more up to date discussion via the following link >>> http://www.property118.com/bank-of-ireland-increase-differential/#comment-22428