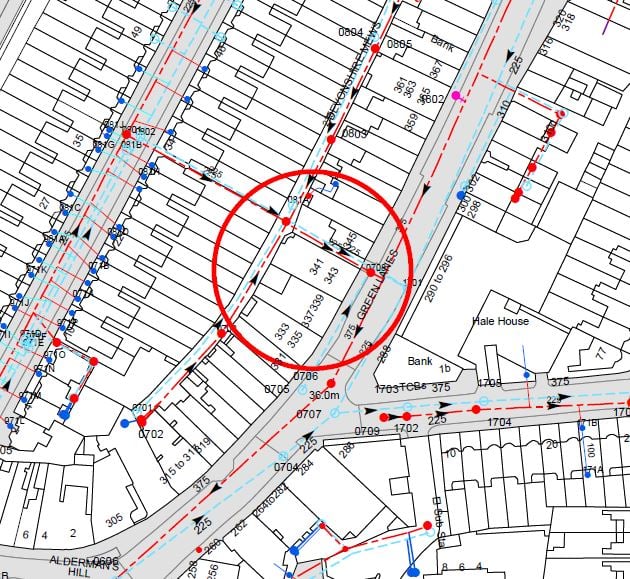 Calling all legal minds for help please – Bullied by Council and Water Co.

I have been embroiled in a 3 year campaign waged against me by the local authority being Enfield Council, along with Thames Water. This is a classic case of large institutions, abusing their position and adopting bullying tactics – To date it has cost me £8000 plus an award  by the court of a further £7000 for Enfield Council costs this element yet to be settled.

This matter seems to be somewhat unique, as there is no other test case ruling similar, which is why I feel it should be highlighted.

To summarise, Enfield Council served me with NOTICE section 59 of  the building Act back in  December 2014. It relates to a cross connection of foul to surface water drainage from the building I own.

Without any indication there was an issue of any kind, I am now forced into a position  to rectify & connect existing and historical pipework directly to  infrastructure drainage belonging to Thames Water – This being after  27yrs of my personal ownership

My defence team which includes Chartered surveyor Anthony Mogridge, feel this to be incorrect  on a number of levels and an abuse of the law.

Essentially we believe  drainage below ground and on a private service Road, should make provision to carry waste from the original Soil stack fixed to the curtilage of the building I own,and that responsibility for alteration to it  lies solely with Thames Water.

The irony is the developer at point of construction 1900c, would have paid a large fee to the local Council and Water Company for the final connection.

However, nearly 100 years on it is the same two authorities, that seek to hold me responsible for the Cross drainage issue?

There does seem to be a contradiction in law with the building Act being applied, and the Water Act 2011  ignored by both Enfield Council and Thames Water.

The ruling of the Water Act 2011 clearly states, lateral drainage MUST  be adopted by Thames Water – Refer to item 11 below with illustration .

Not technically minded or in any way familiar with building regulation Judge Newton was cleverly steered by Barrister acting for Enfield Council to rule in their favour. The district Judge conceded it was a complicated matter, and on the day implied she may not be able to reach a verdict.

How I ask did she some 2 hours later manage to do this, it would have not been possible to have read through all the evidence painstakingly put together over many weeks. My own interpretation is she had Me a Landlord on one hand, with Enfileld Council and Thames Water on the other. They must be right? The judge would have found it extremely difficult go against these authorities, and as their Counsel stated that I am a landlord collecting rent on the properties. Implying I am unscrupulous and can afford it?

We now have no option, but to appeal to the High Court to over rule the judgement, an application being submitted Tuesday of last week

It is a great injustice both on a legal and moral footing causing much stress and anxiety in turn affecting day to day business operations.

I very much doubt Enfield Council have the technical expertise either. Good luck with your appeal.

Hi
Had a similar case with ST Water,the local authority was not involved though.
We were notified by ST that a block of flats we own were cross connected & to rectify the situation to their satisfaction @ our cost.We were very fortunate that the notice from ST was a few days after the vesting date for lateral connections & private drains ,they subsquently carried out the work themselves after we had brought their local team up to date.Sorry this is not much help other than to say check all your dates.

Hi Turan, I was wondering if I could use the "Common Sense approach" to see what the issue is as I have noticed our society at large now lacks complete common sense, it has become rare as hens teeth,so first of all you need to explain in a more layman's terms what are the issues with your drainage, has not the property been connected to public sewage system before you purchased the property now for 27 years?

I am quoting your 3rd paragraph which appears to contain an error, have a look at it again
"Without any indication there was an issue of any kind, I am now forced into a position to rectify & connect existing and historical pipework directly to infrastructure drainage belonging to Thames Water – This being after 27yrs of my personal ownership"
Should it be saying "Without any indication there was NO issue of any kind"
Please if you explain in a layman's terms, we could better understand the problem and guide you better if any of us can.
thanks
Mike

Further to my comments above, do i understand that your drains (stack pipe) has been connected directly to the cross link, instead of being linked to the main drainage running under the street?

In reality, would it not have cost you a lot less if you did have to get contractors to relay new pipes and connect your pipework to public drains under the roads. Perhaps i am misunderstanding the whole issue, but you can clarify for us. thanks
mike

I think I can see here one issue why Thames water may want you to connect directly to mains sewer running under the roads, because at some stage in future, they may want to remove any cross links, because these cross links run under privately owned properties, so they may have a technical issues here when renewing public drains, they may not want to implement any cross links in future, that means your property which is currently connected to the cross link may become practically become disconnected from the public drainage, and leave your property without a connection to a public drainage.
My understanding is that any private drains under your own property are your responsibility, so if you were to lay new pipes to join to your public mains sewage that runs under the roads, it is the final connection that is a major works issue, where it is quite possible that only Thames water can carry out this task, and therefore may want to charge you for connecting your drains to a public sewage system.
However, I understand your standing on this issue, as far as you are concerned, there has never been an issue with you, as your property had been connected to this cross link many years, and if Thames water wants to disconnect it from it, and reconnect you to the mains drains under the road, then common sense would say that it is their need so they need to fork out the cost.
So who pays for such work...... he who needs it changed. simple logic common sense!

Reply to the comment left by Mike at 05/01/2018 - 12:30
What about the liability ( and Insurance / indemnity ) against the solicitor acting for you in the Purchase of the property 27 years ago ?

Reply to the comment left by Gordon Cupper at 05/01/2018 - 10:08
Hi Gorgon.,
Thanks for the info, it follows what I have reliably been informed to be the case. The Water Act 2011 requires Thames Water to adopt lateral drains, of which My Chartered surveyor says they have been separately paid for ?
There is so much more to this which may become evident as I reply to others !