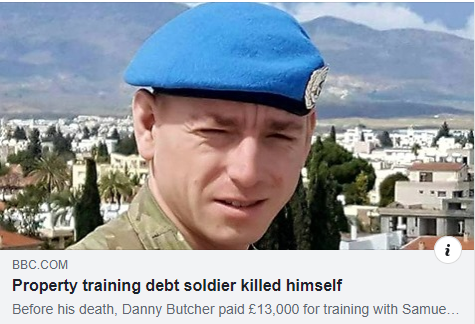 You may well have seen this story on the BBC website and also in The Telegraph. There have also been several links to them on Facebook and other Social Media over the last few days. The story has certainly prompted a lot of discussion.

Some of what I am about to say here is extremely controversial, so I must point out that my views are entirely that, i.e. personal to me.

As background, I will post links below to the articles mentioned above and also to a video response published on You Tube by the owner of the property training company, Samuel Leeds Limited. I must also point out that in my 31 years in business as a landlord I have never run a training company, nor have ever I paid for property based training. I didn’t go to University either and the only debt I have is secured against my own property in the form of mortgages. Furthermore, to my knowledge, I have never met Samuel Leeds, nor have I been incentivised in any way to write this article.

So, what do I have to say that’s so controversial?

Every year, hundreds of thousands of British Students take on debt to fund themselves through University, in the belief that an education will help them later in life.

Does The Telegraph and the BBC report those Students who take their own lives in the same way, or is the linking of their stories to Samuel Leeds just another attack which stems from Media jealousy for those who make it in the property sector?

Does every student who studies astrophysics end up working as a rocket-scientist at NASA or for an F1 racing team? Of course they don’t, and I suspect that many of them will work in very normal 9 to 5 jobs and some don’t work at all. Does this mean they were mis-sold? Do they get a refund for their University tuition fees if they don’t get their dream job? Of course not!

I have no idea whether Samuel Leeds really is a successful property investor or whether he employs high pressure sales tactics. Likewise, I have no idea whether his training courses add any value to people who attend the free ones or the premium versions. Either way; is it right that he should receive death threats and accusations that his business was the cause of Danny Butcher’s death?

If you have actually been to one of Samuel Leeds free training events I would love to hear from you in the comments below? Was it a high pressure sales pitch? Did you buy? Did you enjoy it? Did you get value from it? If you neither enjoyed it nor got value from it, did you feel suicidal as a result of it?

In 2018, it is reported that 71 British military personnel and veterans took their own lives – source ITV website

Please note that I have read both of the articles below and watched both of the video’s I’ve linked to below in full.

LINK TO article in The Telegraph –  “Exclusive investigation: The property ‘guru’ leading people into debt in pursuit of ‘financial freedom'”

LINK TO Samuel Leeds Video Response – “Response to my critics”

LINK TO Mike Winnett Video – “Is Samuel Leeds a Scam?”

Reply to the comment left by Monty Bodkin at 21/01/2020 - 20:20
Sorry Monty, I made a conscious decision many years ago to stop visiting the forum you have linked to. In my opinion, it thrives on negativity and back biting and provides no real value to any landlords who are seriously running a property rental business. It seems to me that a hardcore of their Members seem to think they are providing a service to the industry by attacking any person or company that has a a large audience, whether they deserve negative critique or nor, save for the forums own sponsors of course!

The owners of the forum seem to relish in the above, despite their own well proven shortcomings and naive mistakes in regards to promoting property sharks in their past, because it makes their forum busy as a result of those being attacked rising to the bait and asking their followers to defend them. This drives traffic to their forums, which helps the owners to sell advertising. It's a despicable business model in my opinion and I'm surprised the authorities haven't closed it down yet. I'm sure they will get their comeuppance in due course though, I am a believer in Karma.

Reply to the comment left by Mark Alexander at 22/01/2020 - 07:27
The thread at PT is actually very useful as it explains to dissatisfied customers how they can get a refund. Considering that one group of over 70 people were looking for refunds totalling over £200,000 (source: BBC) this should be a very useful thread - particularly for those who have no money and are now £12k in debt.

I would also suggest Mark that your comparison of SL's course with a University course is quite simply ridiculous.

A university course can be paid in instalments and only when you're making a certain amount of money.

With SL's course, the investigative journalist said that she had no money AND no income. The response from the SL rep was: "how would you like to pay?" As she left to go and phone her credit card company to "raise the limit" another SL employee grabbed her to continue selling the dream.

Mark, at the very least, can you not see how vulnerable people (with no money and no income) could be sucked into paying £12k for a dream that won't come true for many?

Reply to the comment left by Mark Alexander at 21/01/2020 - 19:36
I'm not sure how the reputation of the private rented sector is being tarnished here as the main point of the programme is that a property investment seminar over-promises and doesn't always deliver, and vulnerable people are getting into debt because of it.

Reply to the comment left by Mark Alexander at 22/01/2020 - 07:27
The link shows a facebook page thanking Property 118, it wasn't an endorsement of the website. The same page can be found elsewhere.

Mart and Monty - noted and thank you.

Mart, if that's the case, then as you rightly say, he deserves the bad publicity. The way I read it though, it was a case of the Media finding yet another way to portray the PRS as a bunch of greedy shysters. When I watched they guys video response, I do admit to feeling very sorry for him, but then I don't know any of the other background facts. That's why I asked people to come forward who have attended his premium training courses, but so far none have.

Reply to the comment left by Mark Alexander at 22/01/2020 - 07:27I think Monty was just pointing out that Samuel Leeds himself, on his Facebook page, posted (after the programme’s airing) a ‘thank you’ to Property118. It says: “Thanks to the Telegraph, Property118 and others for offering a balanced view…” I can’t see I’ve seen anything either positive or balanced on here about him. Property118 would do very well to distance themselves from this chap.

A screenshot can also be viewed here…

Reply to the comment left by Poppy10 at 21/01/2020 - 17:24
A lot of unis do keep records to show how many people from course x were gainfully employed in that field 12 months after leaving uni.

To get a more balanced view, you may want to watch Samuel's "Hater's Dance" video response when he found out a group was set up to help people get refunds:
https://www.propertytribes.com/samuel-leeds-haters-dance-video-t-127644756.html

There are also several examples here of people paying £12k and not getting what was promised - I'm sure they would speak to you. The £2k DFE course appears to be a near repeat of the free crash course:
https://www.facebook.com/groups/794312204318704/

Finally, here's what appears to be Danny's (RIP) own story (scroll down):
https://dkohara.com/dont-get-ripped-off-by-a-furu/

I am appalled that you are providing cover for Samuel Leeds who is a total scammer! It is just ludicrous that you are making the connection with academic institutions and a dodgy property trainer who was responsible for a mans suicide. Its nothing like university as
a) Universities do not pressure sell and use NLP or sob stories
b) You get a universally recognised degree which everybody knows has value
c) Universities dont have a huge amount of customers taking to social media saying they have been ripped off.
d) University debt is based upon ability to pay it back not credit card rates
e) Universities don't lie about content and deluded people to ruin their credit file and make them unmortgable

Mark Alexander you are providing cover for a con man basically.
Do your research properly!