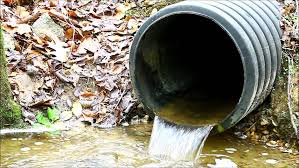 Currently in year four of a new build/grade listed 2 building conversion and just discovered that my waste water pipe from the kitchen is not connected to the main sewer.

I initially had an issue concerning a leak under my kitchen. Other than a constantly blocked sink, a smell had developed around the hallway. This smell was reminiscent of sewage/waste water which might have been originating from the downstairs toilet. Then, after closer inspection of the area between the front door and the toilet, it was apparent that the floor was affected by some kind of water flow as the carpet/floorboards squelched every time they were walked on.

On lifting the carpet in the hallway, areas of damp were discovered on the floor, as well as rising damp in the corner of the hallway, below the electrical twin socket, and the internal walls attached to the kitchen door. It was at this point that a plumber was called to inspect the blocked sink and leak below the kitchen/hallway floor. Following additional visits by a plumbing specialist company, it was discovered that the waste pipe from the kitchen was not connected to the main Thames Water waste pipe in the garden. The pipework from the kitchen had stopped at the boundary wall of the living room and subsequently covered with dirt, soil and grass. This meant that since I moved in to my new build property in December 2012, all waste water associated with the kitchen sink, dishwasher and washing machine has been flowing into the ground soil under the corner of my property.

On news of the missing pipework, the property developer appointed a groundswork company for an independent inspection and they concurred with the findings of the plumbing specialist. Following approval by the property developer, they were commissioned with the job of connecting a new pipe between the house and the Thames Water main waste pipe. This involved digging a gully of about 15 foot in the garden so the connection could be made. Following completion of these works, the plumbing specialist returned to inspect the new pipe and confirmed that the flow of water from the kitchen was working as expected. However, once they had jet cleaned all of the connection, they noted that one of the pipes had ‘bellied’. Due to this defect a great deal of scum/grime build-up had been caused in the pipe. It was subsequently removed but the plumbing specialist stated that this problem is likely to return in the years to come.

The visible damage at present is rising damp on the walls and floor in the kitchen, hallway and living room (above the exit point of the original water pipe). Along with a damp stained carpet and dug up garden by the groundswork company. What isn’t visible is any damage under the tiled floor in the kitchen and the rest of the ground floor. My other concern is the possibility of subsidence considering the water escaping into the foundations of the property for the last 3.5yrs.

I was issued a building certificate to certify the property has met all building regulations when clearly it hasn’t. It has also been three months since I raised my concerns to the property developer. They continue to drag their heels in proposing a plan of action for the remedial work, reimbursement of the costs I’ve incurred to prove they’re responsible, and the rehousing of my family and I until the property is back to the standard I thought I had bought. As such I feel I need to take things up to the next level.

Therefore, can anyone offer any advice or recommendations for a good legal practice/solicitor that specialises in building controls/regulations? Also, based on the above, would I be able to report the property developer to trading standards or another organisation for their shoddy workmanship? And, because of this, would I be in line for any compensation?

What a mess Literally!

You may want to consider an engineers report as like you say I would be worried about subsidence as well.

We have a whole team of Barristers who specialise in different fields at our partner chambers Cotswold Barristers. You can make contact with them from our private prosecutions page for an initial chat here >> https://www.property118.com/private-prosecutions/

Have you spoken to Building Control? I would first speak to them and, specifically, the Approved Building Inspector who carried out inspections throughout the build and issued the completion certificate. He should have inspected all waste connections to the mains sewer. The developer should tell you who this was, or Building Control.

The Inspector and/or Building Control should advise you what the next steps are. Their advice may save you a few bob on initial legal fees.

You state that the property was a 'new build'? As such, you should have received a 10 guarantee on the property from NHBC, Premier Guarantee or similar. Although the developer/builder is responsible for any problems arising in the first 2 years the guarantee provider normally inspects the building work at least once during the construction process. If you are not happy with the response from the developer/builder you should make contact with the guarantee provider as they can put pressure on the builder to resolve the problems.

As Steve Burman says, if you have a Building Guarantee Certificate this is effectively an insurance policy for you and your lender that will take care of any building related problems for the first 10 years.

Usually they will write to the developer informing them of the problem and asking if they wish to become involved, but they will manage everything for you.

The developer pays a lot of money for this insurance and their history of claims etc will effect their rating going forward and therefore their premiums for any future projects. It may be worth mentioning to them first that you are intending on making a claim if it isn't resolved in a more timely manner as the developer may wish to avoid this.