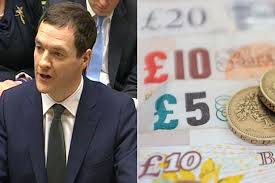 Well George, it’s that time again when you look back on the past year and forward to the year ahead.

How was 2015 for you? You are probably feeling very pleased with your achievements. Your Conservative party was elected with an overall majority in the May election. Now there is no Clegg, Cable or other moderate Liberals to hold you back. You and your chum Dave are in full control, marching on with the policies that suit your political aims.

Free from the constraints of coalition, you didn’t waste much time in bringing forward proposals that were not in your election manifesto and were ruled out by David Cameron’s promise to the electorate that income tax would not be increased in this parliament. In your Summer Budget on 8 July, you put the boot into landlords with your Alice in Wonderland Tax which will prevent landlords offsetting legitimate business costs against profit. Despite the protests from landlords, the Institute of Financial Studies, Professor Philip Booth, the ICAEW and many others, no amendments were made to your proposal and you easily got this legislation through Parliament.

You really had it in for buy to let in 2015 didn’t you? In addition to removing the 10% wear and tear allowance, you also announced in your Autumn Statement that from April 2016, Higher Rates of Stamp Duty Land Tax would apply to the purchase of buy to let properties and second homes.

Your political priority is clearly to promote home ownership, but unfortunately you are forgetting those who can’t afford to buy and can’t access social housing. Can’t you see that your Clause 24 buy to let tax grab will not help first time buyers get mortgages? For years, successive governments have recognised the important role played by the private rented sector. What has changed George?

Looking ahead to 2016, what might be in store? Do you have other buy to let tax grabs up your sleeve to be announced in your March budget? Let’s hope not, as your existing policies are already perfectly adequate to achieve your objective of taxing most landlords out of existence.

We don’t have a crystal ball and so can’t predict what other surprises you will come up with next. We can however make a few predictions for 2016, based on the proposals you announced in 2015. Just for you George, here are our predictions:

We are raising funds to challenge you in court. Here is our fund raising page. It’s amazing what can be achieved when so many people feel aggrieved and are willing to contribute to a good cause.

Well George, that’s about it from us. We do wish you health and happiness in 2016 but we do hope you will get some better advisers in 2016 than those you had in 2015. Happy New Year.

I disagree that GO and the Conservative Party actually care that much at all about helping people on the housing ladder. This is all about tax take and vote grabbing. After all if the Tories were that concerned in home ownership then Brandon Lewis would be in the Cabinet - but he isn't.

I agree with Jacob's predictions for 2016.

something desperately needs to change.

Cosmo.....the judicial fund is nothing to do with how many people contributed....but whether or not the tax breaks European laws. It's about proving wrong is wrong.

The reason so few people support it is surely - Most don't know about it, or do not think it will happen, or effect them, or feel they can't change anything.

The private rented sector offers a flexible -form of tenure and meets a wide range of housing needs. It contributes to greater labour market mobility and is increasingly the tenure of choice for young people......"

Better statistics would help. How many will make a loss or zero profit by 2020? for example.

Guardian today
http://www.theguardian.com/housing-network/2016/jan/01/britains-housing-crisis-2016-2015-market-bedroom-tax
Finishes ........"cement this period as a moment of extreme economic and political stupidity in the face of all available evidence. Still, perhaps next year I’ll wish for a land value tax, as well."

But misses the real reasons.

I agree hes after the votes of youth for the party . Political spin lets make the young think we care about their flight, get them on the housing ladder and then take it all back when they need care .

If it moves tax it.

Does it break European laws ? Does anybody know ? In which case we can win this battle

According to this Oxford tax expert yes https://taxatlincolnox.wordpress.com/2015/12/29/could-state-aid-law-protect-buy-to-let-landlords/

It's heavy reading because it's tax and law from the perspective of a true boffin. I don't profess to understand the relevance of any of the cases he's United but I do like the beginning and the end of his article.
.

Heavy it definitely is, but he thinks only one Ground might possibly stand up, but the bar us high!

"It is under EU State Aid provisions however that the landlords might actually have a case. I’ve blogged elsewhere about State Aid Law (here, here and here) and am fascinated by what I see as an overextension of the law in the area. It might seem strange that a provision originally introduced to prevent states from intervening in the single market by favouring their own national undertakings and industries over others could be used to challenge (effective) tax hikes, but that is the strange direction that the law has been taken.
State aid arises,"