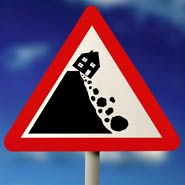 A student landlord’s dreams of property riches collapsed in to a nightmare of £3 million in debts as he broke laws to run his letting business.

Daniel Eaton, 36, now has his portfolio of houses in multiple occupation (HMO) for sale to recoup some money – but he is £1 million short as his assets only total around £2 million.

His problems started in September when his student tenants found out that he was letting them rooms without the appropriate HMO licences from the local council.

They refused to pay rent and Eaton’s cash flow dried up, leaving him no money to pay remortgages and business bills.

Now, Eaton, of St Andrews, Fife, has to find another to pay £5,900 in fines after admitting 10 offences of breaching HMO rules and other housing laws at Cupar Sheriff Court.

Sheriff Charles Macnair told Eaton that his fines would have been more if his financial circumstances were not so dire.

The court was told Eaton, a trained architect and skilled tradesman, let his properties to university students in St Andrews, but failed to apply for the necessary HMO licences.

When his tenants found out the lets were unlawful, they refused to pay any rent until he rectified the problem.

Defending, Douglas Williams said: “He knows why the legislation is in place and he cannot deny he has been wilful in as much as he did not secure the appropriate licences.

“One can at least say that the position here is that there were no incidents that led to tenants being endangered.

He also explained that property management was not one of Eaton’s skills and his efforts at running a property business were ‘shambolic’.

Fining Eaton, Sheriff Macnair said: “Multiple occupation laws were brought in to make sure that a tenant has a safe property to live in.

“You would appear to be insolvent but that does not mean I should not impose fines of an appropriate amount. These fines must take priority over other debts.”