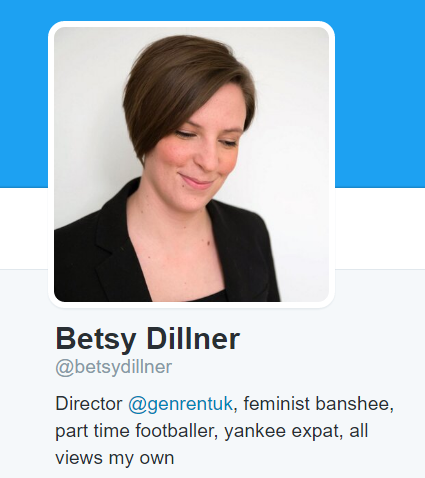 We have given Betsy Dillner, the Director of Generation Rent the nickname “Ditsy Dillner” on account of how often she contradicts herself.

In ‘How to change the housing crisis: build relationships’ Betsy Dillner says: “the PRS has more than doubled in the last 10 years, to 11 million households across the UK.”

She claims “We as a society are addicted to the idea of rising house prices, and we now see property as a commodity more than a human need.”

She says “We think we have about 1.2 million landlords in the country, but we don’t actually know because the government doesn’t even know who the landlords are any more.  So if you think about 4 million private rental households trying to organise against 1 million, that becomes really difficult.”

Thus in the space of a few minutes she has the number of PRS households at 11 million and at 4 million – video link . So come on Ditsy, how many is it?

She wants to organise renters to act together to take action against the housing crisis, to give them the same sort of power as trade unions. She said that for this to happen renters need to form relationships. She would like the renters to copy the rent strikes of 100 years ago in Glasgow, with the renters’ “union” supporting those who are evicted as a result.

She wants to discourage First Time Buyers.  She wants the renters’ union members to dissuade those who might be tempted to feed the rising price addiction by buying a property – presumably on the lines of Alcoholics Anonymous?

This is contrary to what she implied in Joe Lynam’s notorious BBC programme earlier this year. Then she said “These tax incentives have pushed a lot of amateur landlords into the market and removing these incentives will professionalise landlords and make way for First Time Buyers which may (sic) have been pushed out of the market because of these tax incentives pushing up prices.”

She says they need a way of organising renters, but concedes that she and her colleagues do not know how to do so. She says she is proud to be part of the housing movement.  Again, she asked people who want to get a foot on the ladder to think about how it feeds the addiction (and presumably to refrain).

She wants both prices and rents to come down even while acknowledging that the crisis is due to a chronic under-supply of new dwellings.

Her fantasy is for renters to come together, refuse to buy a property out of solidarity, and then refuse to pay rent and opt for eviction instead, making themselves intentionally homeless and therefore ineligible for support from the council.   It is Utopian socialist drivel.

Generation Rent describes itself as “Campaigning with private renters for professionally managed, secure, decent and affordable privately rented homes”. A rent strike would deprive renters of their homes. Why would its only director promote such a counter-productive idea?

In February she welcomed S 24 because it would force landlords to sell, and make way for FTB’s.

In May she appealed to renters not to become FTB’s, as described above..

At the end of October she welcomed the Stamp Duty surcharge because it would deter “speculators” from buying property and “shutting out would-be first-time buyers”: Daily Mail Link

She seems confused.  Can she make her mind up whether she approves of renters becoming FTB’s or not?

We are confused as well.  Given that the aim of her organisation is exclusively to improve the quality of life of renters, why does she welcome taxes that will reduce and keep low the supply of rental accommodation (by deterring landlords from buying or forcing them to sell) thereby increasing its price?

She admits she is not a housing expert, and that her friends describe her as a bit of a professional trouble maker.  We are also confused as to why the BBC and the Daily Mail would ask her to comment about taxes that affect housing.  Or does she call them?

Finally, let’s look at her thoughts about section 21 – these are from Twitter …

Ouch! Poor Betsy! Mind you, they've got form. Wasn't it GR who told everyone last year that landlords couldn't possibly put up the rent any further in this market, then produced a video telling tenants how to negotiate with a landlord putting up rent - which included the advice that you might just have to end up paying it?! (It was). Bless them. They're doing their best. (It's just a shame their best doesn't include any sense of either consistency or reality!).

She also says there's 1.2m landlords when official figures say 2.1m. And 11m PRS households? There's only 27.7m households in the U.K. Wouldn't that give the PRS a market share of a shade under 40% - when most figures say it's around 19%? Not brilliantly well informed, eh?

Eddie put it to him that if landlords’ costs are increased, those who ”stay in the game” will just pass them on to people who rent.

Dan Wilson Craw said “Well, the the the rents that we are paying at the moment are set by erm the excessive demand compared to under-supply of of homes, so er landlords are already charging as much as they can get away with so if they tried to charge anything more then you’d probably find that erm there’s other landlords who can charge less and and and and tenants can er can can just decide to move and and find a landlord who doesn’t have a mortgage to pay or erm erm and in fact as you mentioned with the er with the er Treasury statement that that the majority of landlords aren’t actually affected by this er by these changes.”

It sounded, painfully, as if this was the first time he had tried to put this theory into words. So there we have it. Excessive demand, under supply at the moment and landlords charge as much as they can.  However, once S 24 forces some landlords to sell - shrinking the market - and other landlords to increase the rent to prevent bankruptcy, their tenants will be able to move to unmortgaged landlords who will somehow have vacancies and somehow have suddenly stopped charging as much as they can get away with.

Like Betsy Dillner, his thought processes owe more to fantasy than to the real world. But he has already moved out of London to live with his parents, so the fact that his wishful thinking is divorced from reality does not affect him. He will not have to test it. However, he may incur the wrath of those members of Generation Rent who will pay the price of his support for S 24.

Also, he has swallowed the Treasury spin that only 1 in 5 landlords are affected. Those who are most affected are those with large portfolios. Applying the Pareto Principle indicates that the 1 in 5 own 80% of the rental properties. It will be difficult to squeeze everybody into the remaining 20%.

Finally, if you listen to him, you will realise that he is to Communication what Betsy Dillner is to housing expertise: http://www.bbc.co.uk/programmes/p04bvwh2

Do you have a link to that video please James?
.

Cancel that James, I found it. A whopping 165 views!

In fairness, it actually good advice.

Pity they haven't thought through the implications of supporting section 24 quite so well isn't it?

4:05 BD says she is not a housing expert [statement of the bleeding obvious if you ask me]

As landlords although we might not be as organised as we could be, lets hope Generation Rent continues to be run by Blustering Betsy and Dopey Dan. Because if it is - we haven't got anything to worry about.

Section 24: What has it forced you to do?