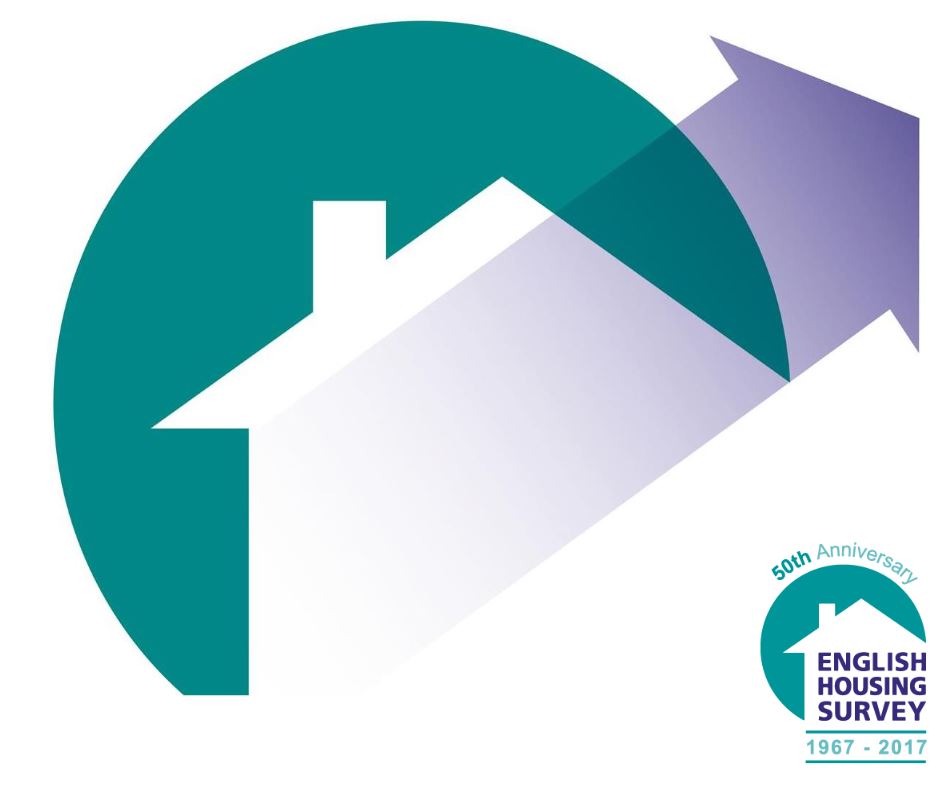 The English Housing Survey on the Private Rented Sector (PRS) 2015-2016 was released yesterday by the Department for Communities and Local Government.

Despite popular propaganda most private renters move, because they want to with only one in ten asked to leave by their landlord.

The Main Findings of the report are below:

“The private rented sector remains the second largest tenure in England, and has grown in the last decade or so.

There has been a large increase in the number of families in the private rented sector, particularly lone parent families.

Private renters spend a significantly greater proportion of their household income on their housing costs than social renters, but are less likely to be in arrears.

On average, households in the private rented sector spent 35% (including Housing Benefit) of their income on rent. Social renters spend, on average, 28%.

Some 9% of private renters were either currently in arrears or had been in the previous 12 months, compared with 25% of social renters.

Churn in the private rented sector is higher than in other sectors.

Most private renters move because they want to but one in ten was asked to leave by their landlord.

Among those private renters who had moved in the last three years because their landlord had asked them to, roughly two thirds (63%) were asked to leave because the landlord wanted to use or sell the property.

While the energy efficiency and quality of the private rented sector has improved, standards lag behind the social rented sector.

Over a quarter (28%) of private rented homes failed to meet the Decent Homes standard in 2015. The comparative figure for social sector rented sector was 13%. Although the private rented sector has always performed less well than other tenures using this measure of housing quality, there was a marked improvement in the proportion of non-decent private rented homes over the 2006 to 2013 period from 47% to 30%. Since then the proportion of non-decent homes in the sector has remained virtually unchanged.” 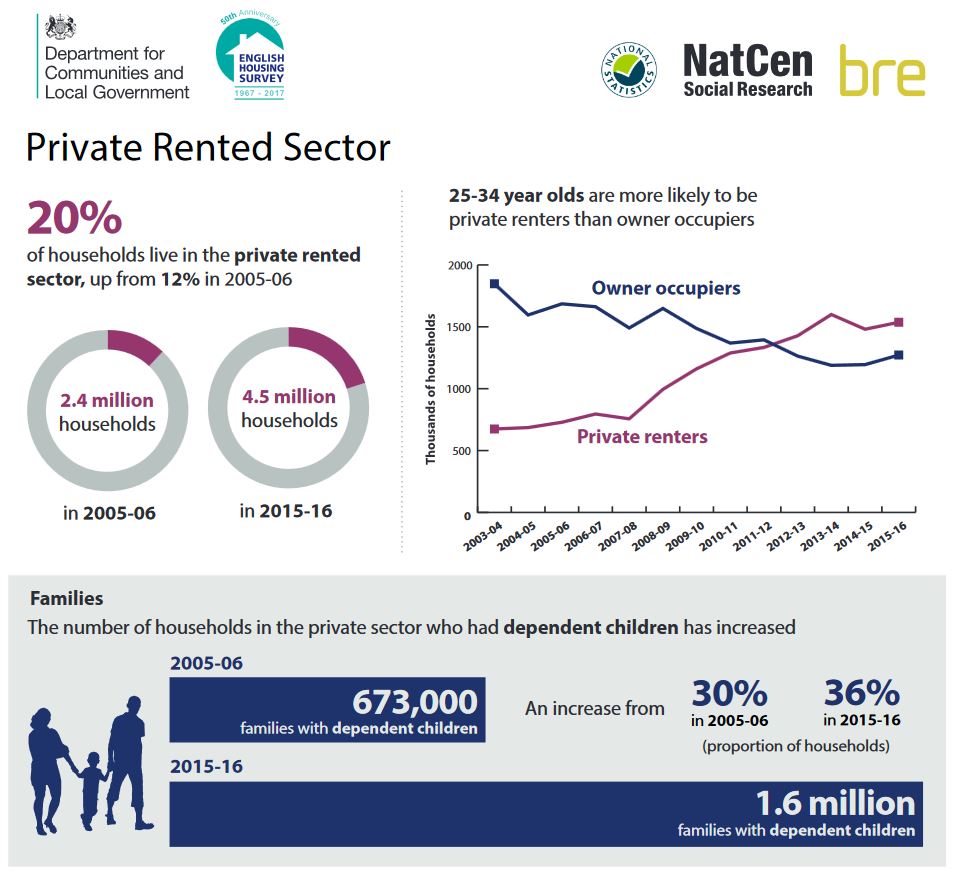 Thanks, Neil, for the summary.

A few quick points before I go out, just based on the summary:

1. I think there is a methodological problem when tenants are asked why they had to leave a property - it is possible that quite a few would not admit even in a survey that it was because they had damaged the house, were in arrears and so on - people may doubt the anonymity of the research and/or have even convinced themselves that it was not their fault they were asked to leave. Also, the more rogue tenants are less likely to fill in surveys I would think so the sample could be skewed. When landlords are asked, the results come out quite differently and in the majority of cases, unlike in this research, it is not about them needing to sell the house but more about arrears and damage.

2. They have made the same mistakes as they always make when comparing what private renters, social renters (and owner-occupiers) pay on their rent. For example, they have not mentioned (or maybe have in the report - I will check) that private landlords have to pay tax on the profit from the rent whereas social landlords don't have to, so the latter are in effect subsidised. When they compare owner-occupiers they always leave out the issue of the costs of maintenance, insurance and so on that are included within the private rent collected.

3. They mention that many private renters are unhappy with their status as renters. Well that's just obvious. Everyone would prefer to be an owner-occupier - but not everyone has the means or wants to make the effort to put themselves in that position. I might have a car on Hired Purchase, but prefer to own it outright. I might not want to go without my nights out, my mobile, my Sky package and my holidays etc. though, to achieve this. I don't know what the real point is of including this in the survey on its own - again, maybe the rationale is in the report (not got time to read it yet!).

4. Regarding proportion of income spent on rent, they should always treat London and the rest of the country separately, because of the unique situation in London which skews the figures.

I will look at the report later and see if anything else occurs to me.

I skimmed through the summary above, but what stood out to me was 28% of income is spent on rent by social tenants and private pay 35% of income on rent. Given social landlords (as in housing associations) do not have to pay ANY tax cuz they are a charity. leave morgaged landlords aside a moment, that means they are only 7% cheaper and given rates of tax of 20-45 (and hidden band of 60%) and other hands outs social get. I would say they are more expensive by a country mile compared with private. No where a national audit report found this year since 2006 ouside london social landlords rents have increased faster than private.

Does anyone know if a similar survey is done on the social rented sector and if so, where I can find it?

I don't think you are quite correct there because social rents tend to be cheaper and the residents by definition poorer.

The equivalent rent in the PRS might be £250 p/w and therefore the tenant's income about £700 p/w.

So in this case the private rent is not 7% higher but nearly 100% higher.

And of course social rents never exceed a certain level, but private rents can be much higher, especially in the SE.

This survey was carried out between April 2015 and March 2016. Since then landlords have started to increase rents or sell properties because of S 24, evicting benefit recipients in the process. The potential increase in homelessness, and in the cost of temporary accommodation for them is much bigger than I imagined.

The anti-landlord brigade often claim that Housing Benefit is a subsidy to landlords. Next time you see such a comment you can refer them to the glossary on page 39 where the government confirms that it is in fact a subsidy to the tenant:

“Housing Benefit: A benefit that is administered by local authorities, which is designed to assist people who rent their homes and have difficulty meeting their housing costs. Council tenants on Housing Benefit receive a rent rebate which means that their rent due is reduced by the amount of that rebate. Private and social housing tenants usually receive Housing Benefit (or rent allowance) personally, although sometimes it is paid direct to the landlord.”
https://www.gov.uk/government/uploads/system/uploads/attachment_data/file/627686/Private_rented_sector_report_2015-16.pdf

One of them deals with “Housing costs and affordability, 2015-16”
https://www.gov.uk/government/uploads/system/uploads/attachment_data/file/627683/Housing_Cost_and_Affordability_Report_2015-16.pdf

Chapter 1 on page 6 has the title Housing costs
1.1 The Household Reference Person (HRP)is the person in whose name the dwelling is owned or rented or who is otherwise responsible for the accommodation.

Overview of mortgage and rent
1.2 In 2015-16, the average (mean) weekly mortgage payment of £159 was
lower than the average weekly rent for private renters (£184). The average
weekly rent for social renters was also lower at £106 for housing association
renters and £95 for local authority renters, Annex Table 1.1.

1.3 Housing costs were higher in London across all tenures. For private renters, the average weekly rent in London was £300 per week, almost twice the average outside London (£153), Figure 1.1.

1.4 Smaller differences between London (£129) and outside London (£95) were
observed in average weekly rents in the social rented sector. The average
weekly cost of renting from a housing association in London was £139.

2.2 Four measures of income are explored within this section. The two main
measures are HRP and partner income and all household income. In this
chapter, neither measure includes Housing Benefit.

Chapter 3 starting on page 16 has the title Affordability. This is analysed in a number of ways, as follows.

There is also a sub-report on Future home owners
https://www.gov.uk/government/uploads/system/uploads/attachment_data/file/627151/Future_home_owners_full_report.pdf

Main findings (edited down for relevance to the PRS)

52% of all private renters expected to be owner occupiers in the long term.

Future buying expectations
1.3 Of private renters, 59% expected to buy at some point in the future (2.6 million households).

How to deal with incorrect licence advice from agent?