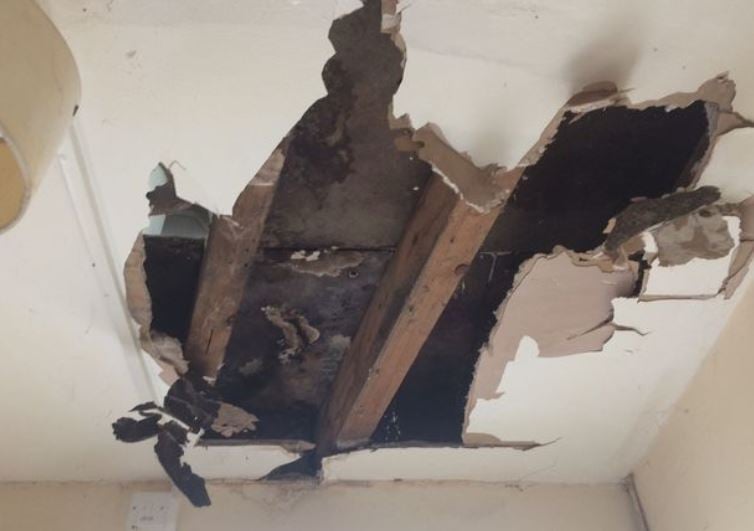 Trail of destruction by tenant from hell in Liverpool Echo

The Liverpool Echo have shown the flip side of the landlord story with a shocking tail of wilful destruction by a tenant from hell.

Click here to see the full article and terrible photos.

The Landlord is Steve Parry, a 55 year old surveyor, who bought two rental properties to supplement his pension and retirement planning. However, the plan went ‘Bad’ for his property in Wavertree Liverpool.

The Photos in the Echo show a ceiling that collapsed after a (assumed deliberate) flood in the bathroom, piles of rubbish including bags of dog mess, trashed kitchen and smashed doors.

Steve served notice on the tenant in 2015 as she fell behind with rent and had a large frightening dog that was prohibited under the tenancy agreement.

Steve, in his Echo article, reported: “The house was wrecked, it’s shocking. She had failed to sort the rent out despite numerous promises, so I gave her two months’ notice to quit.

“I was then forced to serve two notice on her, which cost £200 each and she ignored. I had to get an order for possession in court, which I only got in the November. She was supposed to vacate by the 13th December, but despite everything I let her remain on agreement she would leave after the New Year.

“But she refused to move, saying she was looking for a new house. I had no choice but to pay for court bailiffs. She was finally removed this April.”

It was then that Steve found the trail of destruction wrought on his house.

Steve said that although he knew it was unfair to tar all benefits tenants with the same brush, he also could not take the risk again, and knew many landlords were now choosing not to rent to tenants in receipt of benefits especially with Universal Credit reforms forcing tenants to manage their own benefit payments.

He went on to say “people assume you’re loaded as a landlord, but I haven’t made a bean I’ve had that many problems. All I’m hoping is the house value will be more than I bought them for.”

Steve’s final plea to the government was to continue to crack down on bad landlords, but to also redress the balance protecting good landlords from bad tenants.

Only too familiar, I'm afraid. Currently in the middle of refurbishing two properties in Middlesbrough which have been left damaged by tenants and not fit to re-let.

One well-known LHA-specialist letting agency even moved a tenant from one of my houses to a second one after they claimed a problem with the neighbours and they then did a runner from that one. Both were badly damaged by the same family, leaving me with two four figure bills!

You get used to it. They're very cute, one of mine did the same the then did a runner just before due in court so you don't bother chasing and so don't bother going to court therefore nothing is on their record!

The only protection against such tenants is to avoid renting to them in the first place. Carrying out extremely thorough referencing and supplementing this with:
- checking tenant history databases
- credit checking against all alternate names and addresses revealed by the initial tenant check
- checking online and following up leads
- checking against Trustonline.org.uk and
- demanding their last 3 months bank statements
will considerably mitigate against the risk of getting a rogue tenant.
However, many landlords let in areas which only attract high risk tenants, so they need to be fully aware of this risk and have contingency plans such as plenty of funds for rent arrears, damage and court fees plus rent guarantee insurance and reliable guarantors in place. Small landlords should really avoid this market.
Unfortunately, thanks to the housing crisis, local authority housing departments and the courts are more than happy for private landlords to continue housing rogue tenants for as long as possible so the state discharges any responsibility.

Everything you have said is true, however, it's not so plain sailing with those applicants that pass the checks either.

I get grief from the so called "professional " tenants as well!

The bottom line is this...

The whole system is rigged in favour of the 'rogue' tenant.

Obtaining a tenancy by misrepresentation or fraud isn't prosecuted by the Police.

Rent arrears of 2 months allowed, before notice with a mandatory ground 8 can be used.

Subletting isn't an offence if you rip off a private landlord.

Court dates are now upwards of 2 months before a hearing.

The court fees for the hearing are appalling.

If you use PCOL, you can only claim for rent arrears + court fee or you breach CPR rules.

A court hearing is traumatic, the paperwork involved is unbelievable in its intricacies.
You now have to have witness statements for service of notice and for service of arrears statements in a prescribed format or the case can be thrown out.

You face a FREE defence solicitor, who can do stuff on the back of an envelope and they get away with it.

Then, should you be so lucky as to win, the court grants the tenant up to another month to get out.
The judges can refuse you permission to upgrade for a HCEO.

The money order isn't registered unless it escalates to enforcement.

If you escalate via the County Court the tenant gets a minimum 2 week warning, by post.

The repossession can be appealed, despite being on mandatory grounds.

The Bailiff grants Xmas Amnesty from the middle of November until January.

The tenant can flout the court order and no offence is prosecuted.

The council is obliged to offer emergency housing, for a fraudulent, contract breaching, vandal, that perverts the course of justice, leaves a trail of destruction and for those not working gets LHA thrown in at the same time.

It's an absolute effing farce!

I think if a tenant on benefits is taken to court the government should pay for both the rent, damage and court costs.

Similar story for me a couple of times now. Been there before and knew what was coming so, the last time it happened I offered the tenants opportunity to walk away from £4k rental debt if they went within two weeks. They did but left my house in a similar state to the one in this story plus they walked away leaving all of their furniture. Didn't leave a forwarding address and then messaged me to ask for their deposit back! I invested as a way to provide myself with a pension after my husband died but I'm getting out. I've been a good landlord to my tenants but enough is enough, the stress is too much and the constant battering from government in tax changes and a set up which favours the tenants with no protection for the us. Just not worth it. So many landlords now getting out because of this, let the government deal with the rise in homelessness.

I get regular calls from the council offering me financial incentives to take on benefit tenants because they're so desperate. I tell them every time 'not a chance'. I know there are good benefit tenants out there but the council will be putting them in their own housing stock first and letting the nightmare tenants wreck property that they don't have to pay to get fixed.