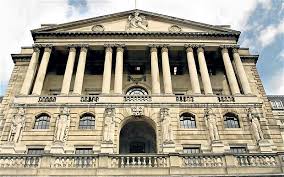 This news release describes the results of the Bank of England’s latest quarterly survey of public attitudes to inflation.

From February 2022, the survey has been conducted on the Bank of England’s behalf by Ipsos, prior to that it was conducted by Kantar. Ipsos interviewed two quota samples of people aged 16-75 across the United Kingdom; the first sample was surveyed between 4 and 7 February 2022 and the second between 18 and 21 February 2022.

Highlights from the Survey

Question 2a: Median expectations of the rate of inflation over the coming year were 4.3%, up from 3.2% in November 2021.

Question 2b: Asked about expected inflation in the twelve months after that, respondents gave a median answer of 3.2%, up from 2.4% in November 2021.

Question 2c: Asked about expectations of inflation in the longer term, say in five years’ time, respondents gave a median answer of 3.3%, up from 3.1% in November 2021.

Question 3: By a margin of 59% to 7%, survey respondents believed that the economy would end up weaker rather than stronger if prices started to rise faster, compared with 55% to 10% in November and 46% to 13% in August 2021.

Question 4: 33% of respondents thought the inflation target was ‘about right’, down from 37% in November 2021. The proportions saying the target was ‘too high’ or ‘too low’ were 32% and 17%, respectively.

Question 5: 8% of respondents thought that interest rates on things such as mortgages, bank loans and savings had fallen over the past 12 months, compared with 14% in November and 21% in August 2021. Meanwhile, 54% of respondents said that interest rates had risen over the past 12 months, compared with 34% and 26% in November and August 2021, respectively.

Question 14: Respondents were asked to assess the way the Bank of England is ‘doing its job to set interest rates to control inflation’. The net satisfaction balance – the proportion satisfied minus the proportion dissatisfied – was +6%, down from +14% in November 2021.

Perfect example of results of a survey being out of date by the time they are published. This morning's news says that fuel prices alone have risen by more than 14 times wage increases over the past year and that is before the £600 rise in the domestic energy price cap which comes into force in April. When energy prices rise the impact is felt throughout the economy. Add in the impact of costs directly and indirectly caused by events in Ukraine and the survey respondents' optimism regarding future inflation looks badly misplaced. I fear we ain't seen nothing yet. (Nothing like a post from Old Mrs. to brighten your weekend!)

What to do with equity release funds?

Are Buy to Let nightmares keeping you awake at night?