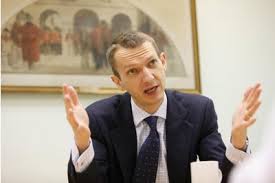 Andrew Haldane. the Chief Economist for the Bank of England, has caused concern in markets today with his pessimistic outlook on the world economy and how it could slow the UK’s recovery. Sterling has dropped 0.5% against the US Dollar and share trading has been volatile.

Mr Haldane said, “Let me now add three flies to the ointment. These are features of the UK economy which paint a more sobering picture. In particular, let me offer three reasons to be fearful:

1) Annual real wage growth in the UK – average weekly earnings growth adjusted for consumer price inflation  is currently running at close to minus 1%. Growth in real wages has been negative for all bar three of the past 74 months. The cumulative fall in real wages since their pre-recession peak is around 10%. As best we can tell, the length and depth of this fall is unprecedented since at least the mid-1800s.

2) Productivity  (GDP per hour worked) was broadly unchanged in the year to 2014 Q2, leaving it
around 15% below its pre-crisis trend level. The level of productivity is no higher than it was six
years ago. This is the so-called “productivity puzzle”. Productivity has not flat-lined for that long in
any period since the 1880s, other than following demobilisation after the World Wars.

3) Annual real interest rates for example, rates earned by households on time deposits adjusted for
consumer price inflation are around zero. They have been near-zero for close to four years. Real
deposit rates have not been that low since the 1970s, when inflation was in double digits.”

Mr Haldane’s conclusion for the economy is now more cautious:

“In June, when evaluating the UK’s monetary stance, I used the metaphor of a batsmen in cricket deciding whether to play off the front foot (raise rates) or the back foot (hold rates). And I compared the averages of two English batsmen, one who played from the front foot (Ian Bell), the other from the back (Joe Root), to
illustrate the dilemma. At the time, Ian Bell averaged 45 to Joe Root’s 43. In other words, while it was a close run thing, the data narrowly favoured the front foot. Cricketing statistics are not the sole basis for my views on the appropriate stance for UK monetary policy. Nonetheless, on balance, I felt the same front-foot judgement was appropriate for UK interest rates at the time.

Three months on, it is time to update the batting averages. Ian Bell’s batting average has remained at 45 – the front foot recovery has remained on track. But over the same period, Joe Root’s has risen to 51. Cricket statisticians and financial markets are agreed. While still a close run thing, the statistics now appear to favour the back foot.

On balance, my judgement on the macro-economy has shifted the same way. I have tended to view the economy through a bi-modal lens. And recent evidence, in the UK and globally, has shifted my probability distribution towards the lower tail. Put in rather plainer English, I am gloomier. That reflects the mark-down in global growth, heightened geo-political and financial risks and the weak pipeline of inflationary pressures from wages internally and commodity prices ex
ternally. Taken together, this implies interest rates could remain lower for longer, certainly than I had expected three months ago, without endangering the inflation target.”

It was certainly not all doom and gloom in his speech though. He sited many reasons why we are in a much better place now that previously with lower unemployment and inflation, higher growth with GDP increasing at 3% and lower borrowing cost.

However he seems to be managing expectations for interest rates to stay low for a longer period. This in the long run could be his way of making sure we stay on track and continue to see investment that is not frightened off by imminent interest rate rises around the corner.

The cricket analogy doesn't really help, there are a few games I have never really been get my head around, one is macro-economics, another is cricket LOL

Can you ask him for a speedway analogy next time please? 😀
.

I Want To Repair My House And Sell It..But Still Have A Tenant Living There