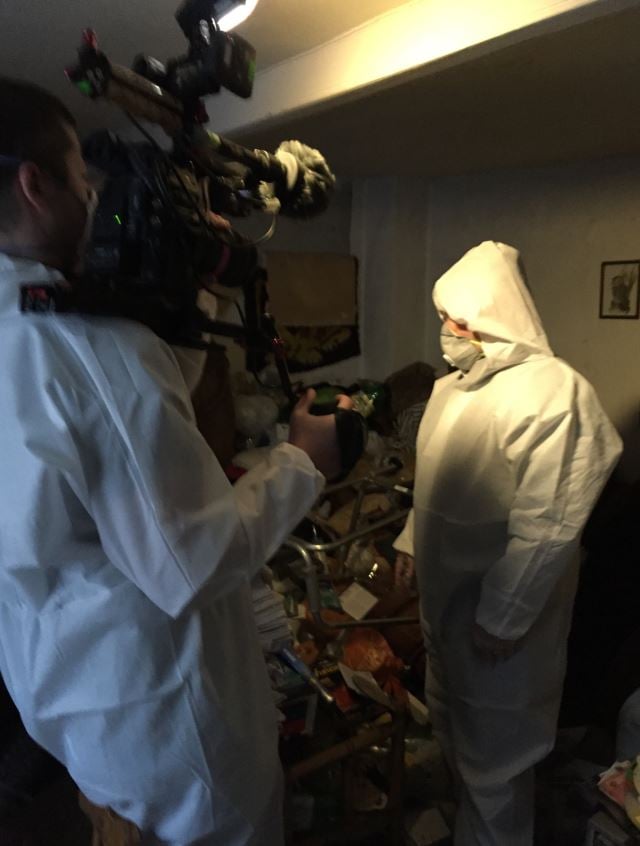 Officially the WORST property I have ever been in!

Last week, whilst filming in the town of March, Cambridgeshire, for the fourth series of Channel 5’s ‘Nightmare Tenants Slum Landlords’, I experienced the worst living conditions I had ever seen in my 27 years in this business.

Although a unique case, it was also tragic. The tenant living at the property was rent protected and had lived at the 18th century two-bedroom cottage for 35 years. Our landlord, who purchased the property with the tenant in situ in 2007, was the third person to have owned this property during the tenant’s occupancy and lived next door.

It turned out that the tenant was a compulsive hoarder who had refused any of the landlords right of access to the property to carry out necessary checks or maintenance repairs. It has taken the current landlord, Leslie Ann, three years to eventually gain possession after the tenant passed away in October, and her probate solicitors signed a deed of surrender.

Once the keys were returned to the landlord, I was tasked with the job of entering the property – the landlord was too distressed to see what state the property was in. You will see from my protective clothing that it was not a pretty sight, and neither was I!

Entering the property with the film-crew was a stomach-churning experience, it was a real-life house of horrors.  From the moment we stepped foot inside, the stench hit you even though we had masks on.  We couldn’t move more than a couple of feet for overflowing mounds of rubbish, piles of belongings and black sacks full of human feces – the bathroom had not been used in the proper capacity in over two years! The floorboards had given way, the ceilings were hanging down and I can’t even begin to describe the fridge which, as I dared to open, appeared to have a life of its own.

Yet, one of the most frustrating things in seeing the state of this property, aside from the tenant’s solicitors trying it on for compensation against my landlord, was that in all the time the landlord had been trying to gain possession, the council had failed to act quickly enough to deem it uninhabitable and help a vulnerable tenant.

A tenant in need of support and an emotional landlord powerless to do anything about it has resulted in the property most probably having to be knocked down and rebuilt.

We will keep you posted when this episode comes out. All in a day’s work eh?!

Now that truly is horrific in all sorts of ways !

I have a property in this condition about three or four times a year. The latest had a bath full of urine because the toilet was broken, smashed to pieces. Nothing will change until the police admit that such damage is Criminal Damage https://www.property118.com/judge-to-look-into-why-tenants-are-not-prosecuted-for-criminal-damage/.

Reply to the comment left by terry sullivan at 01/02/2018 - 10:20
Both you and I know that but the police refuse to take any action saying it is civil because there is a contract in place.

Reply to the comment left by David Price at 01/02/2018 - 10:33
I have a "contract" with HMRC, if I chucked a brick through their window I doubt the police would think it a civil matter.

Reply to the comment left by David Price at 01/02/2018 - 10:33
And anyway it is obviously the landlord's fault that the tenant insisted on living like that.

Serial benefits cheat - can I get my money back?