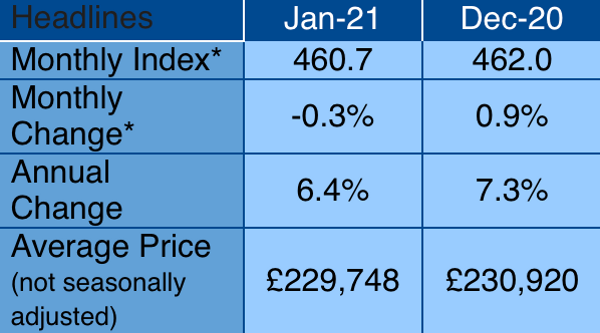 House Price growth slows as SDLT holiday is due to end

This month’s Nationwide House price report is showing annual house growth slowed to 6.4%, from 7.3% in December and that prices are actually down 0.3% month-on-month, after taking account of seasonal factors.

The number of privately rented households fell to 4.4 million (from 4.6 million in 2019), resulting in a slight decline in the proportion of households that rent privately to 18.7% (from 19.3%).

“January saw the annual rate of house price growth slow modestly to 6.4%, from 7.3% in December. House prices fell by 0.3% month-on-month, after taking account of seasonal effects – the first monthly decline since June.

“To a large extent, the slowdown probably reflects a tapering of demand ahead of the end of the stamp duty holiday, which prompted many people considering a house move to bring forward their purchase. While the stamp duty holiday is not due to expire until the end of March, activity would be expected to weaken well before that, given that the purchase process typically takes several months (note that our house price index is based on data at the mortgage approval stage).

“The typical relationship between the housing market and broader economic trends has broken down over the past nine months. This is because many peoples’ housing needs have changed as a direct result of the pandemic, with many opting to move to less densely populated locations or property types, despite the sharp economic slowdown and the uncertain outlook.

“Indeed, the total number of mortgages approved for house purchases in 2020 actually exceeded the number approved in 2019, and house price growth ended 2020 at a six-year high, even though the economy was probably around 10% smaller than at the start of 2020, with the unemployment rate around a percentage point higher.

“Looking ahead, shifts in housing preferences are likely to continue to provide some support for the market. However, if the stamp duty holiday ends as scheduled, and labour market conditions continue to weaken as most analysts expect, housing market activity is likely to slow, perhaps sharply, in the coming months.