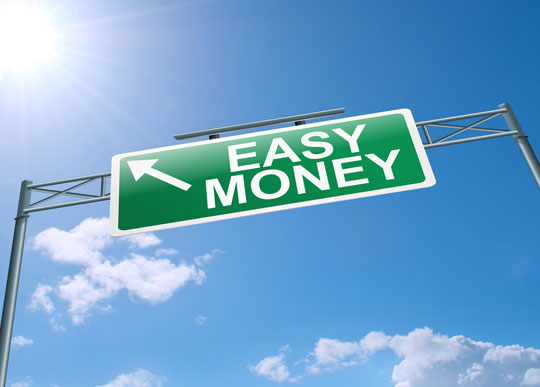 When it comes to deciding where & how to invest, one of the most vital things a novice investor can do is to become an expert on due diligence and research … not just of potential property deals, but also of people and companies offering portfolio building services, joint ventures, mentoring and deal sourcing.

The property investment world has a seedy & un-regulated under-belly patrolled by wealth creation gurus.   Many novice investors fall prey to their charms and promises of easy riches.

The lack of mortgage finance and the need for large deposits has not surpressed this industry in any way.  If anything, more and more people are becoming desperate about their financial future or are worried about their pensions and are turning to property as a solution.   So these gurus find it all too easy to sell the dream.

One of the most common ways that new investors get caught in the web of these people is through sales events that are promoted as “property networking” events.

Mark Trenfield, wrote about this recently in his guest column for Property118, which you can read here.

These events are one of the main entry points into a slick marketing machine that will sell the new investor more and more expensive products, services and mentoring.

You can read more on a discussion on Property Tribes titled In contemplation of the alluring upsell.

It was one such event that was famous for promoting a now bankrupt wealth creation expert who has returned to the scene recently.  In this Property Tribes discussion – Bankrupt wealth creation experts, should the property community care –  Richard Bowser, Editor of Property Investor News, is one of a number of high profile property people who are concerned about his re-emergence.

Says Richard:   “I have regularly been speaking out both in print, online and at various events for over ten years now about some of the shadier practices in property investment. It is of course an entrepreneurial industry and largely un-regulated, so the scope for shady dealing and rip off merchants is substantial”.

Richard goes on to make this statement, which we wanted to share as a salutory warning to anyone thinking of investing in property:

“I am quite regularly contacted by some very concerned creditors about one individual expert/mentor and property sourcer in particular (Mr X) who is still trading and has yet to be exposed due to his ‘protection’ under our UK legal system. For me, this particular person’s activities along with a number of others – three of whom were declared bankrupt just a few years ago – represent much that is wrong in this sector.

Property investment certainly offers high reward to those who get it right, but it also attracts those out to fleece the unwary and to make a quick buck. From the off-plan shenanigans involving the unlamented Inside Track group, and others such as Portfolios of Distinction (sic), and the northern cheap high yield terrace providers led by the PPP of which five directors have served or are still serving time at her Majesty’s pleasure, the last nine years has seen many firms going bust and a number of high profile bankruptcies.

Some were exposed by the Crunch, others like the Newcastle based PPP / Napeer Group which took in over £100 million from investors were closed down by the authorities, but many people lost some serious money. Quite recently some of the harsh realities behind SARB (sale and rent back) were also exposed by the FSA in respect of the North East Property Buyers scandal.

The reality is that we have seen a mini-industry evolve in the UK highlighting ….’Wealth Creation from Property’ all too often appealing mostly to those with few assets and hard cash….and yet a large number of investors have lost many millions of £’s and others could well lose large sums in business failures yet to be declared”.

So how does a novice investor know who to trust?

Here are some simple steps:

1.  Check the track record of the person/company concerned through a google search.  Are they what they seem?  Is their story consistent?

2.  Regularly visit and search sites like Property Tribes, Property118, LandlordZone and, if in doubt, post on these sites asking if anyone has had any experience of a particular company.

3.  Read the Property Tribes guide on how to Avoid becoming property shark bait.  This gives a good summary of the warning signs to look out for.

4.  Research the company on Companies House.  Look for warning signs such as un-filed accounts, Directors who have previously been involved with failed companies.

5.  When attending “property networking events”, leave your credit card at home and be aware of the alluring up-sell.  These events very often have wealth creation experts sharing their stories of rags to riches and how you can do the same.

As economic times become more challenging for everyone, they also become harder for the gurus selling the “get rich quick” scheme. Many of them are struggling with mounting debts and unfulfilled business contracts, which means that they are becoming even more desperate to bring in large tranches of money.  It seems that the more outrageous the claim, the more people want to believe it.

There are going to be some major fall-outs in the next few months.  You heard it here first, a “guru crash” is imminent!

Make sure that you are not one of the people who loses life-changing amounts of money by remembering one simple thing:

7) Google the company or persons name followed by the word scam or complaints or fraud and read as much as possible
8) Call of visit your local landlord association and ask them if they have any 'off the record' feedback
9) Call the Trading Standards office in the area where the person or company operates and ask whether they have had any adverse reports
10) If they claim to be a member of a professional body check it out. If you've not heard of that professional body before check that out too

This doesn't just apply to wealth creation guru's, you can check out any person or business this way, e.g. letting agents, financial advisers, accountants etc.

and remember, no-one will look after your money as well as you do! Do not be in a hurry to pass the responsibility.

IT TOOK ME 4 YEARS AND A LOT OF HARD WORK TO NOW HAVE 15 PROPERTIES ,WITH A 98% OCCUPANCY,AND NOW CAN BE SEMI RETIRED
I AM NOT WORTH A LOT OF MONEY,AND NARROWLY AVOIDED A FRANCHISE DEAL,WHICH IN HINDSIGHT WOULD HAVE BANKRUPT ME
THERE IS NO FAST WAY JUST HARD WORK AND TIME.
I ADVERTISED FOR PROPERTIES MYSELF,AND INTERVIEWED ALL MY TENANTS
ITS AN ONGOING BUSINESS,BUT A REWARDING ONE
IF YOU NEED HELP IM REGISTERED
BOB

Thanks for citing Property Tribes discussions in your article Mark.

The timing is spot on because we currently have a discussion running of several people handing over large sums of money to a property club and ending up with nothing to show for it.

One person explains how he was advised by this club to get loans from family and friends and also take out a "pounds to pockets" loan for his intro fees.

He claims to have lost £32,500 to the company in question. This unregulated industry is patrolled by sharks just waiting to relieve people of life changing amounts of money.

It is only through sites such as Property118 and Property Tribes that novice investors can be educated as to what constitutes a good deal and what the warning signs are with regards to these unscrupulous deal sourcers.

Interesting that the words seedy and unregulated seem to be used interchangeably here. An Interesting though arguably ill-informed and unhelpful worldview. Maybe just maybe there are some genuine companies out there with the desire and expertise to broker genuine unregulated products? But then why bother looking for them when the cosy world of regulated investments has been such a phenominal success in securing investors retirement and financial futures ?:/