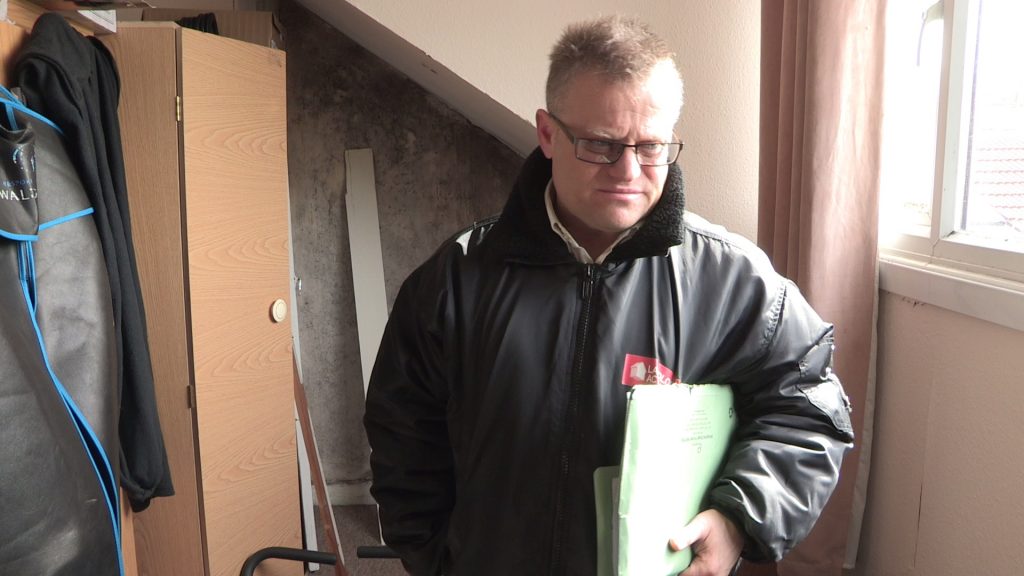 Last week I attended an eviction in East London with the Channel 5 film crew in tow.  This was not an ordinary case; the arrears were in excess of £20k as a result of rent not being paid for over 2 ½ years.

The landlord was based overseas and had passed his portfolio of properties to be looked after by a property manager, who was clearly not up to the task.  They had allowed rent arrears to build up on several of his properties.  As a further blow to this landlords, he unfortunately instructed a fraudulent legal representative to carry out the evictions.  They did nothing for months and then absconded with the legal fees, leaving the landlord losing thousands of pounds worth of rent on his portfolio.

One of the tenants in question tried to defend the case at the hearing on grounds of disrepair, but had not paid a penny of rent since the beginning of 2013.  The judge ordered the tenant to pay £10,000 off the arrears to defend the case, but of course, nothing was paid.

So at the point of eviction, we turned up with the landlord’s representatives, who brought with them a drill to carry out the lock change themselves.  We always advise landlords to instruct a qualified locksmith because when bailiffs turn up on the day of eviction, they only have a 15-20 minute slot to attend before moving on to their next job.  The bailiff knocked on the door but there was no answer from the tenant. You guessed it…the representative could not drill through the lock and we were at risk of not being able to gain access to the property before the bailiff had to leave to do another eviction.  This would have resulted in our landlord having to apply to a very busy Bow County Court and wait another 6-8 weeks for a further eviction date. Luckily, the bailiff was very nice and arranged for an emergency local locksmith to attend, so we waited for another hour for the locksmith to arrive while the bailiff went off to carry out two more evictions.  Once the locksmith had been, the bailiff returned and we were able to enter the property.  The first thing that hit me was the smell, the second thing that hit me was how someone could live like this.  I’ve been dealing with problem tenants for 25 years and I still find myself shocked at the state that some properties are left in.  The tenant had left everything at the property in a complete mess.

Whilst going around each room with the film crew and landlord’s representative, I noticed that the tenant, quite unbelievably, had left his two children’s passports at the property.  Tenants that owe rent and are being evicted, in this case over a lengthy period, just do not accept the fact that the eviction WILL take place. They often make no attempt to move and leave everything until last minute thinking the local council will re-house them and pay for removal vans to take their belongings to a new property. Of course the reality is, if they are lucky they will go into temporary accommodation and then be moved permanently depending on housing stock. In this case, the tenant should not be re-housed as he has made himself homeless by not paying the rent for 2 ½ years.  After the eviction took place, I heard the tenant broke back into the property to take some belongings and threatened to sue the landlord because he wanted the passports back.  I believe the landlord’s representative handed these to the police as they thought the tenant had absconded and would be unlikely to make contact with the landlord (maybe because he owed over £20k in arrears).

Hopefully this story will feature in the series for Channel 5 which comes out the end of June.

This is horrible. Why did it take 2 years for the case to come to a close though?

Interesting case. Let's hope Channel 5 doesn't twist it somehow to make landlords the baddies. I can't imagine how when the evidence is so clear - maybe by portraying the property as though it was in such a bad state the tenant was right not to pay the rent...
It reminds me of how we once had the father of a young non-paying tenant say 'I don't blame him. Look at the state of the house!' I replied. 'Yes, it was immaculate when they moved in and look what they've done to it in 6 months!' They'd even dismantled new divans so that they could have mattresses on the floor and they'd put blankets up at windows, obscene graffiti on walls etc. etc. - they wanted to make it look like a squat to fit their image of themselves as trendy young party animals.
So it would be so nice if this Channel 5 programme can show our side of things for a change and maybe combat the stereotypes of landlords as some kind of perpetrators when we are often victims of criminals.
In fact I'm a bit concerned that the general ant-landlord feeling in the country is going to translate into even more regulatory attacks on us in the next few years regardless of who wins the election, as with more tenants than landlords, politicians know that there are votes in anti-landlord measures....
There. Sorry. That's my moan of the day (well, my first one).

Advice required on removing tenant who called the police!