The latest data from Nationwide shows that there has been a slowdown in annual house price growth to 9.5% in September – from 10% in August.

The survey shows that 10 of the UK’s 13 regions recorded slower annual price growth in the third quarter of the year.

However, the South West was the strongest performing region once again, while London remained weakest.

“Prices were unchanged over the month from August, after taking account of seasonal effects. This is the first month not to record a sequential rise since July 2021.”

He added: “There have been further signs of a slowdown in the market over the past month, with the number of mortgages approved for house purchase remaining below pre-pandemic levels and surveyors reporting a decline in new buyer enquiries.

“Nevertheless, the slowdown to date has been modest and, combined with a shortage of stock on the market, this has meant that price growth has remained firm.”

He also said that by lowering transaction costs, the reduction in stamp duty may provide some support to activity and prices, as will the strength of the labour market, with the unemployment rate at its lowest level since the early 1970s.

Headwinds that are ‘growing stronger’

Mr Gardner also cautions against headwinds that are ‘growing stronger’ which suggests the market will slow further in the months ahead.

Tomer Aboody, a director of property lender MT Finance, said: “Slower house price growth is inevitable, due to higher interest rates along with an increase in the cost of living.

“Buyers have been more thoughtful and patient with their purchases, either deciding to wait or offering well within their means, unlike the past couple of years where multiple offers on properties have pushed prices up, due to buyers being able to borrow at record low rates.”

“With rates increasing at record levels, we will see a shift in sentiment and the move to a buyers’ market, rather than sellers calling the shots.”

Mark Harris, the chief executive of mortgage broker SPF Private Clients, said: “House prices continued to edge upwards in September, mainly due to lack of stock, although clearly some of the heat has come out of the market with the slowdown in annual price growth.

“Lenders have been pulling fixed-rate mortgages left, right and centre as Swap rate volatility makes them extremely difficult to price.

“Many of the smaller lenders in particular are waiting to see what the market does before relaunching.”

‘Chaos erupted in the mortgage market this week’

Sarah Coles, a senior personal finance analyst at Hargreaves Lansdown, said: “House prices stalled, even before chaos erupted in the mortgage market this week, and we saw the first month in over a year without growth.

“This could be a sign of stormier times ahead for house prices.”

She added: “There were already gathering clouds in the property market, with surveyors saying fewer people were house hunting and buyers were losing confidence.

“In fact, consumer confidence hit record lows. There was no real rush to buy, and mortgage approvals for purchases stuck below pre-pandemic levels.

“However, the storm broke this week, with around 40% of mortgages being pulled from shelves because the pace and scale of the collapse in the bond market meant it was impossible to sensibly price them.

“When the dust settles, and lenders come back to the market, we can expect eye-watering rises in interest rates.” 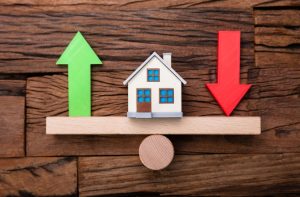 The housing market is becoming a buyers’ market 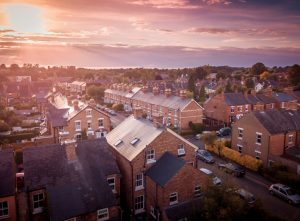