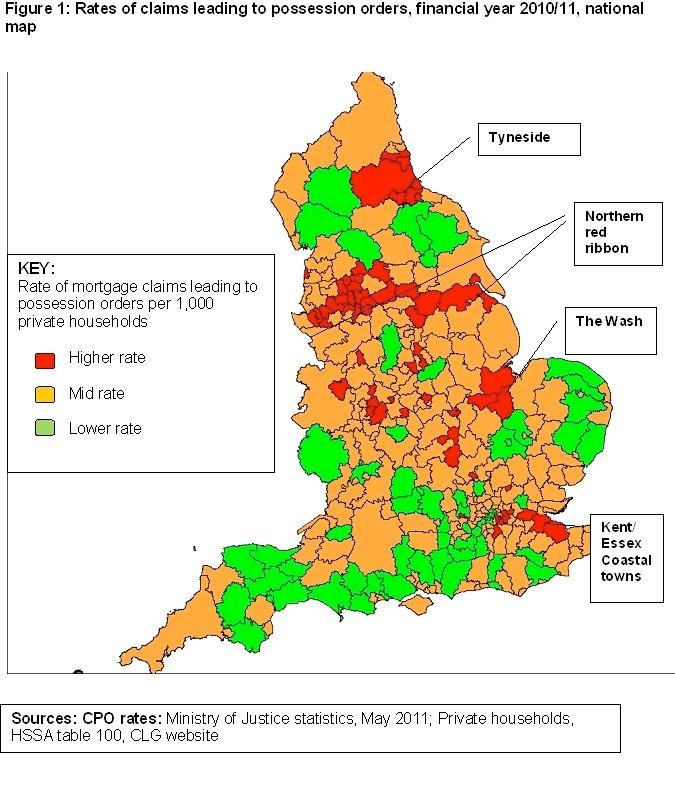 Property owners can check if they live in a repossession hotspot with a new map compiled by homeless charity Shelter.

Researchers plotted repossession data from county courts against council areas to come up with the towns and cities where house and flat owners are most at risk of losing their homes.

Around 45,000 homeowners are evicted every year by banks and building societies – that’s around 125 homes repossessed every day.

Corby, Northamptonshire, is the repossession capital of the UK, followed by Newham and Barking and Dagenham, both in East London.

Knowsley, Merseyside and Thurrock, Essex, make up the rest of the bottom five hotspots.

The map reveals four main clusters of repossessions – the north east; a band stretching from Lancashire across to Humberside; several councils around The Wash and another band from East London along the Thames Estuary.

Figures released by the Financial Services Authority for the first three months of 2011 show repossessions were up 17% for the first time in a year to 9,613.

Shelter chief executive Campbell Robb said: “This research paints a frightening picture of repossession hotspots across the country where homeowners are literally on the brink of losing the roof over their head.

“We know only too well that the combined pressures of high inflation, increased living costs and stagnant wages are really taking a toll on people. All it takes is one thing like job loss to tip people over the edge and into the spiral of debt, repossession and ultimately homelessness.

“And with interest rates due to increase in the near future this research is a clear warning sign of difficult times ahead for many thousands of homeowners across the country.

Mr Robb continued: “It is absolutely vital that struggling homeowners, in particular those at risk when interest rates rise, get help before things spiral out of control and they risk losing their home.”