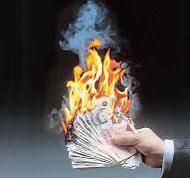 Landlord registration is costing £400,000 per rogue A multi-million pound scheme introduced to crack down on rogue landlords has resulted in only 11 people being reported to the procurator fiscal in two years.

The Landlord Registration Scheme has so far cost landlords and the taxpayer nearly £18 million since 2006, figures obtained by the Scottish Conservatives have revealed.

That breakdown revealed responsible landlords have paid £11.2 million in fees, while the start-up Scottish Government grant for the scheme was £5.2 million. Annual running fees for the website since 2006 are estimated to be just under £300,000.

Despite that cost, only a handful of cases have made it as far as the Crown Office, and only 40 landlords have been refused registration, compared with 200,000 successful applicants.

It means those who let out property and were forced to join the scheme on the grounds it would deal with rogue landlords have paid significant sums, only to see a tiny amount of enforcement.

“This scheme was set up to root out the kind rogue landlords that have no place in the industry, but so far it has cost over £400,000 for every landlord who has been refused registration.

“According to this scheme, since 2006, there are only 40 rogue landlords operating in Scotland, however many tenants will have had an altogether more negative experience.

“This farcical programme, introduced with the best of intentions, is failing to deliver at a tremendous cost to the taxpayer.

“And responsible people with aspirations to get into the property business are being hit in the pocket because of this inadequate scheme.

“The private rented sector is playing an increasingly important role in delivering solutions to housing need in Scotland, and we need a robust an efficient mechanism to help achieve that.

“These figures suggest that at the moment, the Private Landlord Registration Scheme is not it.”

“We represent responsible landlords from across Scotland, and when the scheme was introduced we broadly supported what it was trying to achieve because we want to see rogue landlords out of the sector altogether.

“But with almost £18m of Government and private funds being spent so far with so little, the scheme is doing little to inspire the confidence either of our members or the tenants who look to us for good accommodation and service.

“We appreciate the scheme is also about changing attitudes in the industry, and to some extent it has done this.

“But I also believe that these figures demonstrate a need to review the scheme in order to make it fit for purpose, and I would call on the Scottish Government to instigate this.”

Mark Alexander of Property118.com added “isn’t it about time for landlords to fight back? The government needs the private sector to provide accommodation but landlords need help too and will only be able to continue to expand their businesses if they get it. Please see this petition, then sign it and ask all other landlords and tenants to do so. If landlords continue to be persecuted where will tenant live?

Scottish landlords and letting agents should also join in the fight by joining the Scottish Association of Landlords – see below.

An interesting read. I am registered with two councils in Scotland. The Glasgow council and Clackmannanshire council. I have never heard from Glasgow council except when they remind me that my registration is due. Clackmannanshire on the other hand have organised a landlord training session recently so at least I know they are doing something. However, before I had registered with Clackmannanshire council I was able to rent to a DSS tenant with payment being made direct to me by the council, yet no check was ever made on my registration - is this not a big failing by the council? Are they missing an easy way to check for landlord registration? I wonder how many rogue landlords continue renting property without the required registration.

Seller numbers jump by 22% and Rightmove traffic swells by 27%

Should I purchase a dryer in a shared house ?