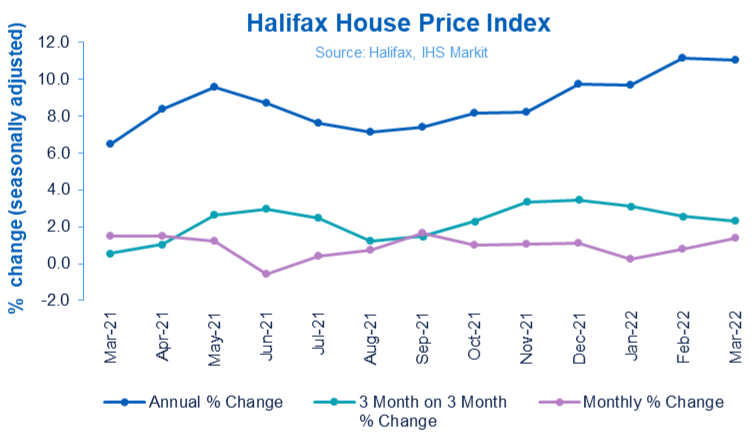 The South West has now overtaken Wales as the UK area with the strongest house price inflation. However, the cost of living crisis is likely to slow the rate of house price growth further into this year.

Russell Galley, Managing Director, Halifax, said: “Average UK house prices rose again in March for the ninth month in a row. The increase of 1.4%, or £3,860 in cash terms, was the biggest jump since last September.

“With 2021’s strong momentum continuing into the beginning of this year, the annual rate of house price inflation (+11.0%) continues to track around its highest level since mid-2007.

“The story behind such strong house price inflation remains unchanged: limited supply and strong demand, despite the prospect of increasing pressure on households’ finances. Although there is some recent evidence of more homes coming onto the market, the fundamental issue remains that too many buyers are chasing too few properties. The effect on house prices makes it increasingly difficult for first-time buyers looking to make their first step onto the ladder but also challenges home movers who face ever bigger leaps to move up the rungs to a larger property.

“However, in the long-term we know the performance of the housing market remains inextricably linked to the health of the wider economy. There is no doubt that households face a significant squeeze on real earnings, and the difficulty for policy-makers in needing to support the economy yet contain inflation is now even more acute because of the impact of the war in Ukraine.

“Buyers are therefore dealing with the prospect of higher interest rates and a higher cost of living. With affordability metrics already extremely stretched, these factors should lead to a slowdown in house price inflation over the next year.”

The South West of England has overtaken Wales as the UK’s strongest performer in terms of annual price house inflation, now up to 14.6%, its highest rate of annual increase since September 2004. The average house price is now £298,162, a record for the region.

While this is the first time since January 2021 that Wales has not recorded the UK’s highest annual growth, house price inflation remains extremely strong, at 14.1%. The average house price is £211,942 which is yet another all-time high for the country.

Property prices in Northern Ireland also continue to be on the rise, with annual growth now at 13%, and an average price of £177,265.

Though house prices also edged up once more in Scotland, reaching a new record of £194,621, the rate of annual growth
continues to slow somewhat, falling to 8.2% from 9.3% last month.

Elsewhere, the South East also recorded a big increase, with house price growth at 11.6% and an average price of £385,790. Prices in the region have now risen by £40,177 over the last year, the first time any English region outside of London has ever posted a £40,000-plus rise over just 12 months.

London itself continued its recent upward trend, with prices now up by 5.9% year-on-year, with an average price of
£534,977.

Does our tenant have to pay CGT after 10 years?