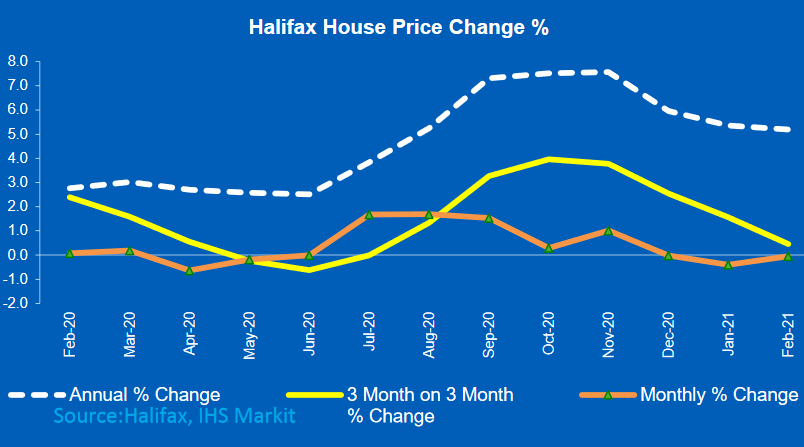 The February Halifax House Price index is 0.1% lower on a monthly basis against January, but in the latest quarter (December to February) house prices were 0.5% higher than in the preceding three months.

Russell Galley, Managing Director, Halifax, said: “Having enjoyed an extremely strong period of activity in the second half of last year, the housing market continued its softer start to 2021, with average prices down very slightly (-0.1%) compared to January. However, with annual house price inflation currently at +5.2%, property values remain comfortably higher than 12 months ago, when February was the last full month before lockdown.

“The housing market has been at something of a crossroads at the start of this year, with upcoming events key to determining the path of activity and prices over the next few months. The government’s decision to extend the stamp duty holiday, one of the main drivers of demand from home movers during the pandemic, has removed a great deal of uncertainty for buyers with transactions yet to complete.

“The new mortgage guarantee scheme is another welcome development from this week’s Budget. Whilst mortgage approvals have reached record highs in recent months, hitting levels not seen since before the financial crisis of 2008, raising a deposit continues to be the single biggest hurdle for first-time buyers to overcome.

“In the longer-term, the performance of the housing market remains inextricably linked to the health of the wider economy. The pace and extent of recovery are still highly uncertain, and much will depend on the ongoing success of the UK’s vaccination rollout.

“Though there is the likelihood of an economic ‘bounce back’ from lockdown, with households not unduly impacted by the pandemic deploying the significant reserves of savings that they have built-up, higher unemployment is likely to limit new buyer demand. Therefore, we would not expect the level of growth seen in house prices over the past year to be sustained throughout 2021.”