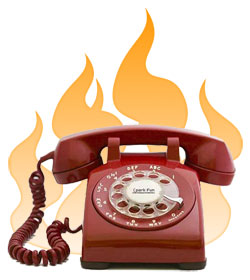 Financial consumer champion gets a complaint call every 10 seconds

Consumer champion the Financial Ombudsman deals with an inquiry from a disgruntled financial services customer every 10 seconds every working day.

The depth of customer dissatisfaction with financial firms was shown in the ombudsman’s annual report that disclosed over a million inquiries were handled resulting in a record 206,000 complaints in 2010 – up 26% on the year before.

Just over half the complaints (51%) were about payment protection insurance (PPI), which is the highest number of complaints ever about a single financial product.

The UK’s four largest financial groups clocked up half of the complaints, while 2,100 businesses accounted for a single complaint each.

While PPI complaints soared, fewer consumers generally had fewer moans about investment (down 30%) and banking (down 9%).

Excluding PPI complaints that are ongoing, around half of the rest of disputes were closed within three months and 75% were resolved in six months.

The results were split – with 51% of consumers receiving compensation, but 49% of complaints resolved in favour of a financial provider.

Natalie Ceeney, chief executive and chief ombudsman, said: “This year has been the busiest in our 10 year history – with over 200,000 disputes referred to us and a million front-line enquiries. This reflects the increased confidence of an ever more diverse range of consumers getting in touch about a wider range of problems and issues.

“Aside from PPI cases, over the year we’ve seen encouraging signs of improvements in the way that some businesses are handling complaints – and it’s good to see that the number of disputes about some other financial products has now started to fall.”

Other consumer groups commenting on the ombudsman’s report criticised the big banks for failing to offer good customer service.

“In the very worst cases, firms are seeing more than 90% of cases that go to the Ombudsman being upheld – clear evidence they do not understand the meaning of treating customers fairly.”

Sarah Brooks, Head of Financial Services at Consumer Focus said: “The banks’ battle to dodge PPI responsibilities has damaged the industry’s reputation and left consumers out of pocket and out of patience.

“Half of complaints relate to just four big groups so customers may want to bear service in mind when they choose their bank. Customers would be better able to make informed choices if they could see how many complaints a bank had received broken down by product – we are calling on the industry to provide this information.”