Despite rumours Bank Base Rate stays at 0.75%

Despite rumours with recent low inflation levels that the rate may reduce by 0.25% the Bank of England Monetary Policy Committee (MPC) has voted 7-2 to not change the Base rate and remain at 0.75%.

The Committee also voted unanimously to maintain the stock of UK government bond purchases, financed by the issuance of central bank reserves, at £435 billion.

However medium term projections do indicate a possible drop to 0.5% as in chart 2.7 below. 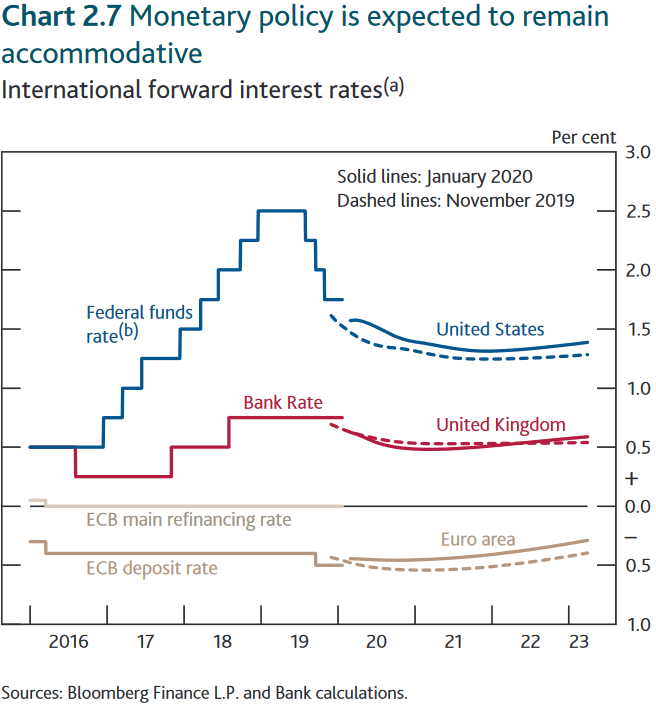 “UK GDP growth slowed last year, reflecting weaker global growth and elevated Brexit uncertainties. Output is expected to have been flat in 2019 Q4. Growth in regular pay has fallen back to around 3½%, though unit labour costs have continued to grow at rates above those consistent with meeting the inflation target in the medium term. CPI inflation fell to 1.3% in December, core CPI inflation declined to 1.4%, and core services inflation is below its target-consistent range.  The unemployment rate has remained low and stable, and employment growth has picked up. Following its annual reassessment of supply-side conditions, the Committee judges that there has been a somewhat greater margin of spare capacity in the economy over recent years, which has been exerting downward pressure on domestically generated inflation.

“The most recent indicators suggest that global growth has stabilised, reflecting the partial easing of trade tensions and the significant loosening of monetary policy by many central banks over the past year. Global business confidence and other manufacturing indicators have generally picked up. Domestically, near-term uncertainties facing businesses and households have receded. Surveys of business activity have picked up, quite markedly in some cases, and investment intentions appear to have recovered. Housing market indicators have strengthened and consumer confidence has increased slightly. The Committee will monitor closely the extent to which these early indications of an improved outlook are sustained and follow through to the hard data on domestic activity in coming months.

“The Committee’s updated projections for activity and inflation are set out in the accompanying January Monetary Policy Report. They are based on the assumption of an immediate but orderly move, at the beginning of next year, to a deep free trade agreement between the United Kingdom and the European Union.

“UK GDP growth is projected to pick up a little in early 2020. Further ahead, and conditioned on a market path for Bank Rate that falls slightly over the forecast period, the recovery in UK growth is supported by a pickup in global activity, a further decline in Brexit uncertainties and the Government’s announced spending measures.  Support from these factors is sufficient to boost demand growth above weakened potential supply growth. As a result, slack is eroded gradually over the first part of the forecast period and a margin of excess demand builds thereafter. CPI inflation is projected to remain below the MPC’s 2% target throughout this year and much of 2021. Further out, and conditioned on market yields, strengthening domestic price pressures, alongside a waning drag from energy prices, mean that inflation reaches the 2% target by the end of next year and rises slightly above it by the end of the forecast period.

“Monetary policy will be set to ensure a sustainable return of inflation to the 2% target. Policy may need to reinforce the expected recovery in UK GDP growth should the more positive signals from recent indicators of global and domestic activity not be sustained or should indicators of domestic prices remain relatively weak. Further ahead, if the economy recovers broadly in line with the MPC’s latest projections, some modest tightening of policy may be needed to maintain inflation sustainably at the target.

“The MPC judges at this meeting that the existing stance of monetary policy is appropriate.”

Rumble with the Agents to raise funds for Inclusion Barnet

If I am renting out a room do I need to pay tax?