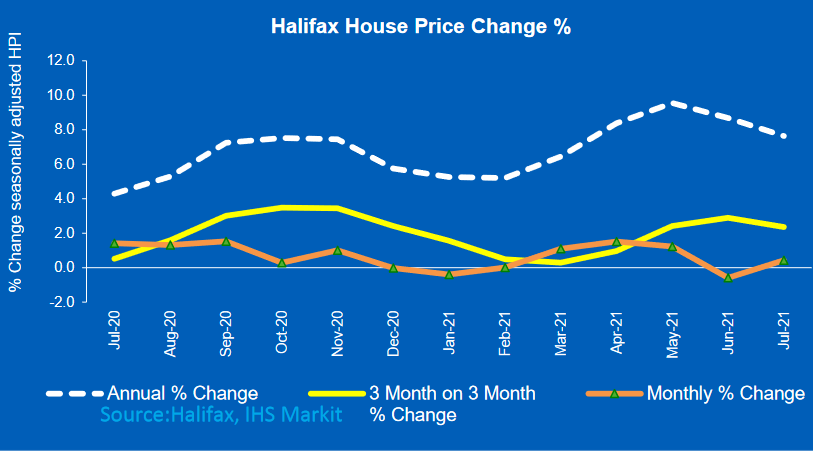 The latest Halifax House Price Index is showing Annual house price inflation at 7.6% compared to 8.7% in June with the average UK property price now £261,221, up 0.4% in July.

|However, Wales recorded its strongest house price growth since 2005.

Russell Galley, Managing Director, Halifax, said: “House prices rose by 0.4% in July to add £1,122 to the cost of the average property, pulling back some ground lost during June (-0.6%, -£1,543). Annual price growth fell to +7.6%, its lowest level since March. This easing was somewhat expected given the strength of price inflation seen last summer, as the market began its recovery from the first lockdown, and with activity supported by the start of the stamp duty holiday. In cash terms, typical prices now stand at just over £261,000, a little below May’s peak but still more than £18,500 higher than a year ago.

“Recent months have been characterised by historically high volumes of buyer activity, with June the busiest month for mortgage completions since 2008. This has been fuelled both by the ‘race for space’ and the time-limited stamp duty break. With the latter now entering its final stages (the zero per cent rate only applies to the first £250,000 of the purchase price, before reverting to standard rates from October), buyer activity should continue to ease over the coming months, and a steadier period for the market may lie ahead.

“Latest industry figures show instructions for sale are falling, and estate agents are experiencing a drop in their available stock. This general lack of supply should help to support prices in the near-term, as will the exceptionally low cost of borrowing and continued strong customer demand.

“Although there remains some uncertainty over the impact on employment from the unwinding of government support schemes, on balance the risks to the macro-environment are receding, with consumer confidence improving, the labour market recovering, and the economy expanding as restrictions are lifted. Overall, assuming a continuation of recent economic trends, we expect the housing market to remain solid over the next few months, with annual price growth continuing to slow but remaining well into positive territory by the end of the year.”

Once again, Wales and the North of England (specifically the North West and Yorkshire & Humberside) continue to lead the way, posting the strongest annual rates of house price inflation, whilst the South West also recorded a double-digit year-on-year rise. Notably, the 13.8% annual increase in house prices in Wales was the strongest growth recorded since March 2005, whilst for Yorkshire, the 11% gain was also the highest for over 16 years. London continues to lag all regions in terms of annual inflation (+2.5%), whilst gains in the South East and Eastern England remain amongst the lowest in the UK.

The latest Bank of England figures show the number of mortgages approved to finance house purchases fell in June 2021 by 6% to 81,338. Year-on-year, the June figure was 98% above June 2020. (Source: Bank of England, seasonally-adjusted figures)

How do I increase the Lease on my 4 Nottingham Council flats?

Landlord sells entire portfolio for £2.3m in 9 days and believes Landlords should follow