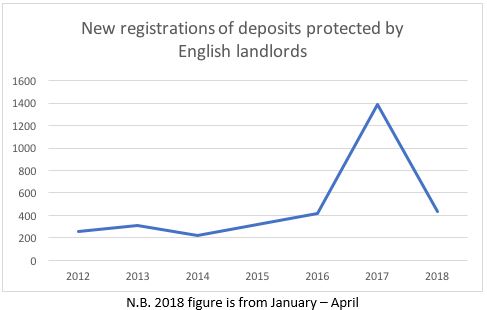 Since 2012, the number of English landlords registering tenancy deposits on properties in Scotland has risen by over 430%, according to new research by SafeDeposits Scotland.

The country’s leading tenancy deposit protection scheme found that in 2012, 260 landlords living in England registered deposits with them on rental properties in Scotland. In 2017, the number was 1,388 new registrations. Data for 2018 shows that the trend continues as the number is up 226% on the same period in 2017.

“Scotland has different deposit protection legislation in Scotland from England and landlords, wherever they are, must ensure that they are using the scheme where their rented property is located.

“We saw a dramatic rise in registrations in 2017, with 1,388 new registrations, which could be down to a number of contributing factors. For example, variations in rates of Stamp Duty in England and Land and Buildings Transaction Tax in Scotland, may make investing more attractive in the north.

“It’s interesting to note that the most significant landlord prosecution for non-compliance was a landlord living in St Albans who failed to protect her Edinburgh tenants’ deposits. Seeing that the legislation has teeth may have spurred other English landlords to make sure they weren’t breaking the law. The landlords’ legal representative at the time (2016) explained she was as “an amateur landlady” but the Sheriff described her as being “dilatory in attending to her obligations”.

Victoria continued: “In Scotland, the private rented sector accounts for 15% of the overall housing stock, growing from 5% before the turn of the millennium.

“While the sector expands and interest from landlords from outside Scotland increases, it is important that they understand the legal framework in which they are operating. For example, navigating deposit protection regulation and Private Residential Tenancy legislation is vital to managing tenancies successfully in Scotland.”

By law, landlords and letting agents who take deposits from tenants must protect them in a Government-backed deposit protection scheme.

SafeDeposits Scotland was established in 2012 when Scottish Government legislation was introduced to protect tenancy deposits. It is the largest of the three approved schemes covering Scotland, the only one based there and the only one operated on a not-for-profit basis. It accounts for almost 60% of the market holding more than 118,000 individual deposits worth more than £84m.