No need to panic about interest rate rises as we are still in a bad place, but an improving place economically.

Yes “Forward Guidance” is dead because the Bank of England got their unemployment prediction wrong, but we still don’t really know why.

Unemployment dropped to 7.1% from 7.7% in three months making redundant the figure of 7% unemployment being any kind of trigger for looking at the bank base rate. This drop is statistically unprecedented being 4 times more than any previous drop for the same level of growth!

However Forward guidance could be said to have been a success by giving confidence for the economy to grow with GDP increasing by 0.7% in the 4th quarter. Forward Guidance was largely understood to have a stabalising effect by the business industry even if it wasn’t by households and popular press.

The irony is that the growth was largely caused by household spending even though incomes are stagnant and not any productivity increase, although construction figures have recovered. 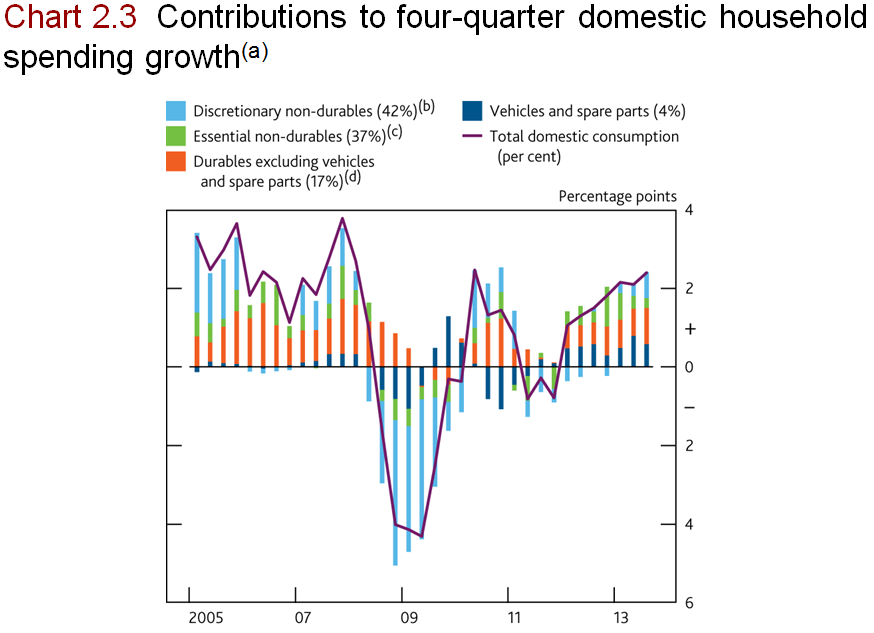 This growth in household spending on goods and services could be pent up demand from previous years de-leveraging household debt. Eg a new car purchase may have been put off since the credit crunch, but now it is getting older and more expensive to run people are now making those purchases. This type of growth is not sustainable in the long term and is why the Bank of England are cautious about the future recovery especially with heavy economic headwinds from European demand falling.

We are still buying more from abroad and with European growth stalling and hence demand for our goods and services so our trade deficit is actually worsening. It is the strength of the Pound, which although having a positive effect on keeping external inflation lower, is making our exports less attractive. This is the age old economic conundrum that what is good for one part of the economy is usually bad for another. 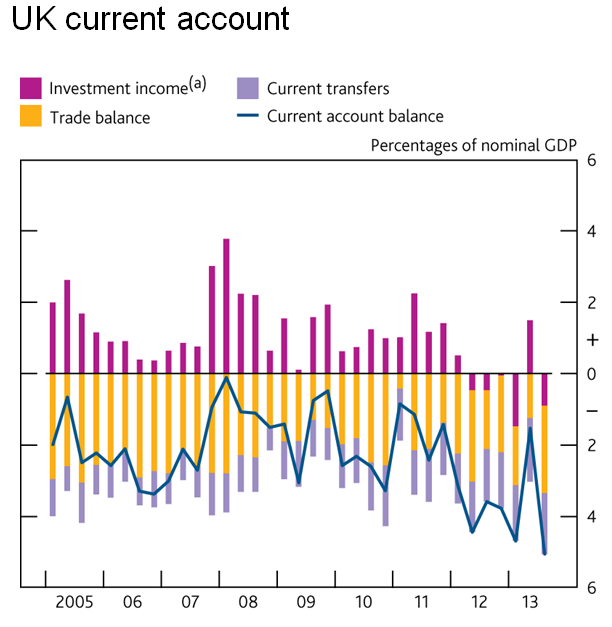 Looking forward The Bank of England believe there is still a lot of spare capacity in the labour market and that is what should be targeted to see a sustainable improvement in growth. What they mean is that on average workers are underemployed and could be more productive. During the recession output dropped by a far greater ratio than employment and especially considering the recent figures on unemployment there must be spare capacity for employees to be more productive.

It is this spare capacity that the Bank of England are going to be carefully monitoring and targeting for any future decisions on monetary policy. The Bank of England believe that the natural level for unemployment is around the 5% point and that we are unlikely to see too much wage lead inflation before this is reached. 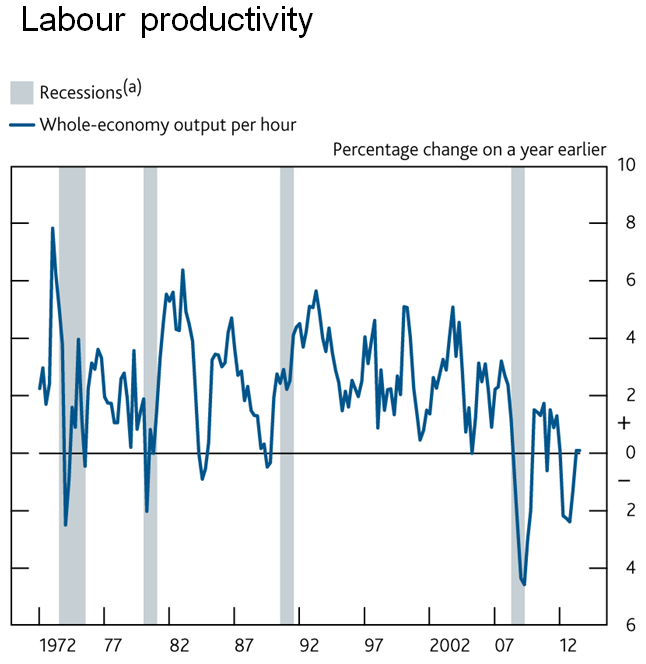 So in summary the good news is that the main target figures of growth at 2% and inflation at 2% are on target, but productivity is slow and the trade deficit is increasing. Therefore there is no short term requirement to dampen a fragile recovery by increasing interest rates and if there is any need to do so in the medium term it would be by very gradual small amounts. 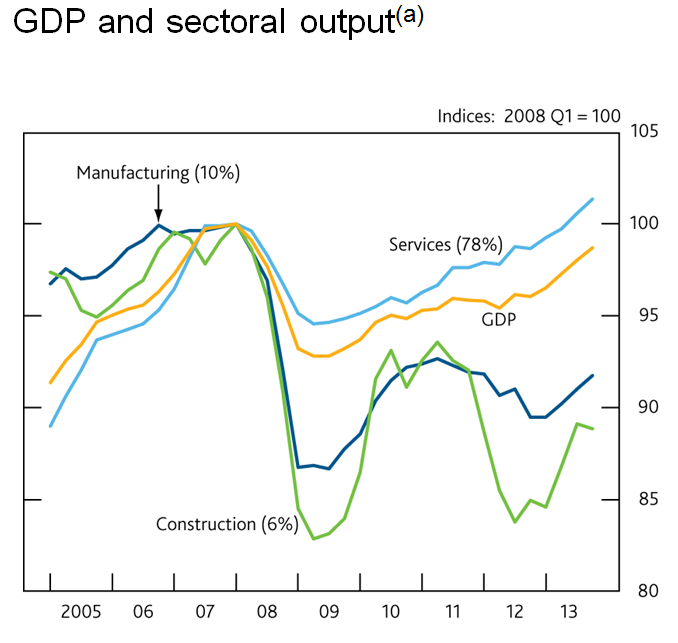 “When is the Bank of England base rate going up?” is the most frequent question I am asked by property investors. Not this year or next is how I assess the latest figures from the May Bank of England inflation report.

Below are some of the key factors affecting the UK and Euro-zone along with a full copy of the Bank of England report. END_OF_DOCUMENT_TOKEN_TO_BE_REPLACED

The Bank of England has released its Agents’ summary of business conditions April 2012, and they believe the housing market to be experiencing mixed fortunes.

Buy to let demand has grown due to growth increases, this has “helped to put a floor under prices.” Asking prices have supposedly been more realistic and new-build has seen more demand, both helping buyers. END_OF_DOCUMENT_TOKEN_TO_BE_REPLACED

Demand for buy to let lending has dropped for the first time in two years, according to the latest Bank of England lending survey.

Specialist landlord lenders told the Bank that they expect the figures to be a blip and the market will quickly recover from the slight fall. END_OF_DOCUMENT_TOKEN_TO_BE_REPLACED

The Bank of England has released the Agents’ Summary of Business Conditions for January 2012, calling the market ‘subdued’. They also noted the growing breaks in chains due to aborted sales and withdrawals having a positive effect in the rental sector. Social housing has taken a hit too due to the reduction of government grants available to housing associations.

Read the report in full

The Bank of England has kept the base rate at 0.5% and pegged quantative easing at the previously agreed £275 billion.

The decision means the base rate has sat at the record low for 34 months in a row and the £75 billion quantative easing top-up will complete around the end of the month. END_OF_DOCUMENT_TOKEN_TO_BE_REPLACED

The Bank of England Agents’ summary of business conditions December 2011 has been released, reporting a “softening housing market”.

First time buyers remain held back due to deposit requirements and home-owners are still wary to trade up due to market conditions. Buy to let investors on the other hand are providing “a source of demand for smaller properties favoured by would-be homeowners unable to buy.” END_OF_DOCUMENT_TOKEN_TO_BE_REPLACED

The Bank of England have released details of their latest inflation report, and despite the economy worsening and global economy slowing, they believe 2012 to be the year of the sharp inflation decline. They also expect GDP growth to continue to be weak until 2014.

The discomfort in the Eurozone has created an air on uncertainty over the expectations of growth and inflation, they warned if a suitable resolution is not found it “poses the single biggest risk to the domestic recovery”.

You can read the full report here.

The Bank of England has left interest rates at the record low of 0.5% for yet another month.

The result is not unexpected as the Eurozone smoulders after attacks from investors and markets around the world.
END_OF_DOCUMENT_TOKEN_TO_BE_REPLACED

The Bank of England have released their Agents’ Summary of Business Conditions for October, and have once again found a depressed housing market. They say high loan to value products are being offered, but the take up has been low.

Worryingly, they said the stagnant market and lack of transactions has provoked concerns for letting agents and solicitors who rely on the housing market.

Click here for the full version of The Bank of England’s Agents’ summary of business conditions October 2011.

Interest rates are to stick at 0.5% for another month as the Bank of England tries to revive the flatlining economy with another £75 billion of quantitive easing.

The decision by the bank’s monetary policy committee leaves the official interest rate at the record low level for 31 months in a row.

Effectively, triggering a new round of quantitive easing will have the same effect as dropping interest rates and calming inflation.

But the bank warns the cost of living is set to get worse before savers and spenders see any improvement.

“Inflation is likely to rise to above 5% in the next month or so, boosted by already announced increases in utility prices,” said the statement.

“But domestically generated inflation remains contained and inflation is likely to fall back sharply next year as the influence of the factors temporarily raising inflation diminishes and downward pressure from unemployment and spare capacity persists.”

The bank also fears the sluggish economy will drag down the economy next year, pushing inflation below the target 2%.

“The squeeze on households’ real incomes and the fiscal consolidation are likely to continue to weigh on domestic spending, while the strains in bank funding markets may also inhibit the availability of credit to consumers and businesses,” said a statement from the bank.

Inflation rose to 4.5% in August due to the continued effect of January’s rise in VAT to 20%, higher energy prices and the increasing cost of imports due to currency rate fluctuations.

“However, it is important that in an attempt to boost short-term demand that small businesses can directly benefit from this cash injection and that the banks use it to decrease the cost of credit and to increase the availability of lending.”

The Bank of England has released their business summary for September. They say the market continues to be ‘subdued’ and first time buyers are still having trouble reaching the first rung of the ladder. They also believe the prospect of high rents has attracted more buy to let investors.
You can read and download the full report here. (To download, right-click and select save as.)

Bank of England have released their Agents’ Summary of Business Conditions for August, and they have found a ‘subdued’ housing market except for in London. Again confirming the numerous surveys published each month.

What do you think of their findings? 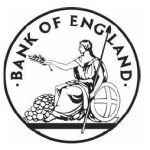 As we reported earlier, the Bank of England have released their Agents’ Summary of Business Conditions for June 2011.

To read the report in full, click here (opens in a new tab to the Bank of England website)

Your comments and feedback are always greatly appreciated, please see below. END_OF_DOCUMENT_TOKEN_TO_BE_REPLACED

BoE find buy to let still on the up Latest Articles

Buy to let up as housing market is subdued

The Bank of England’s Agents’ summary of business conditions June findings have further emphasized the sluggish activity in the housing market, but buy to let continues to thrive.

The smaller properties, usually expected to be bought by first time buyers, have been picked up by buy to let investors capitalising on the market of renters. END_OF_DOCUMENT_TOKEN_TO_BE_REPLACED 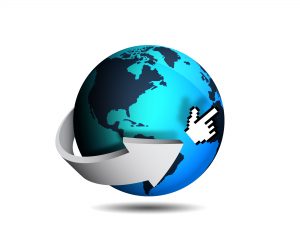 The real worth of official housing market statistics has received another knock with the revelation that Bank of England researchers are relying on Google for their data. 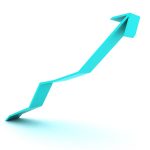 According to new data from the Council of Mortgage Lenders, gross mortgage lending totalled an estimated £11.3 billion in May, which represented a 12% increase from the £10.1 billion lent in April, and was 1% higher than in May 2010. Gross mortgage lending includes lending for both house purchase and remortgage. END_OF_DOCUMENT_TOKEN_TO_BE_REPLACED

Few financial pundits are surprised by the decision as in the past few weeks, dissent within the bank’s monetary policy committee has been diluted by the replacement of interest rate hawk Andrew Sentance with moderate Ben Broadbent. END_OF_DOCUMENT_TOKEN_TO_BE_REPLACED

Bank governor Mervyn King has hit out at interest rise hawks speculating that rates must soon go up in a speech to a finance committee at the European Parliament. END_OF_DOCUMENT_TOKEN_TO_BE_REPLACED

Do you think the Bank of England have lost credibility in dealing with the economy? That is an interesting question and one raised at the regional Quarterly Inflation Report by The Bank of England themselves. END_OF_DOCUMENT_TOKEN_TO_BE_REPLACED