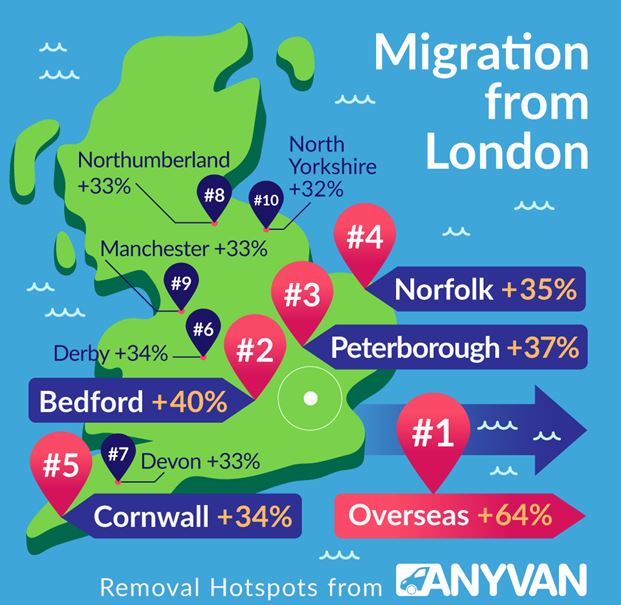 New research shows a staggering 64% increase in the amount of Londoners moving overseas, according to leading home moving company AnyVan.com.

How many of these include Landlords heading for countries with no CGT such as Malta, Portugal and Cyprus?

The latest statistics show migration demand from the capital since the start of 2018. The figures highlight the huge increase in movers going overseas, but also has interesting insights into UK based hotspots for those moving out of the capital.

Bedford has seen the biggest demand change in the UK, with an increase of 40%. With average house prices in the area at just over £321,000, the area is a popular hotspot for those escaping the capital to the commuter zone.

Peterborough might be 80 miles from the capital, but with a quick 55 minute direct train connection into Kings Cross, it’s easy to understand why it’s third on the list with an increase of 37% since January.

Coastal locations in the UK are also proving popular, with Norfolk up 35%, Cornwall up 34% and Devon up 33%.

The North is also seeing huge leaps in popularity, with the AnyVan.com research showing that half of the biggest removal hotspots in 2018 are for the Midlands and beyond. Derby demand is up 34% since the turn of the year with Northumberland and Manchester both up 33%,  North Yorkshire follows at 32% and both Lincolnshire and Leeds are up 30%.

The year on year demand trends show a similar trend, with North Lanarkshire and Darlington both seeing an increase of over 100% and Peterborough up 92%. The northeast scored high with Sunderland up 89%, Durham up 79% and East Riding up 73%. Areas of the Northwest also scored high with north Liverpool area Sefton up 79% and Blackpool up 72%.

Angus Elphinstone, CEO of AnyVan.com commented “According to ONS records migration from London is at its highest ever level and we’re certainly seeing this increase in demand at AnyVan. Our most popular destinations moving out of the London continue to be Hertfordshire and Berkshire, but it is locations in the north that have seen a healthy increase in demand since the turn of the year.

“Capital property prices are likely to be a big factor in all of this, pushing out buyers who can not afford to buy and also owners cashing in their equity to buy in cheaper locations throughout the UK.”

"a staggering 64% increase in the amount of Londoners moving overseas"

And comparing what period to what period?
Without appropriate numbers and dates it is another meaningless article.

Reply to the comment left by Michael Barnes at 25/09/2018 - 21:07
Bang on Michael. I find it frustrating to get a number of statistics on an interesting topic but without context. We need the basis of the statistics. Paragraph three of the header article would suggest the period concerned is since 1/1/18, though the link provided in paragraph one does not link to the report. This means we cannot check the validity of the statistics cited.

• Figures created based on internal data insight from leading removal firm AnyVan.com. Figures include requests for both home removal services and man & van services.
• Year to date figures using data from January 2018 until summer. Year on Year data using May 2017 against May 2018.
• Office for National Statistics internal moves data 2017. London migration up 14% since 2016 and an increase of 55% since 2012.

Reply to the comment left by Neil Patterson at 26/09/2018 - 15:56
But still no numbers, so still meaningless and just an attention-grabbing headline.

Even if there were numbers, it is still just data from one company, and could be due to a higher proportion selecting this company, or a particularly low number moving last year.

All correct. You always need to know the assumptions and data analysed. As ever there are lies, damn lies and ......

Although I would suggest this is more accurate than the statistic done by the Treasury on their Section 24 forecasts !

Is the Freeholder partly responsible?