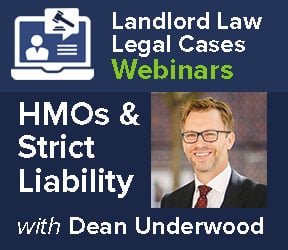 In our Landlord Law Legal Cases series, we discuss one important landlord and tenant legal decision in the Courts with one of the barristers in the case. We will be running the next webinar on Tuesday 26 May at 10.30 am and it is a case on HMO licensing and strict liability. Click here

However it is basically about HMO licensing. It was a number of cases heard together looking at three important points:

1. When prosecuting a failure to license an HMO, does a local authority have to prove that the defendant knew the house was occupied as such, or is it enough that the house was simply an unlicensed HMO?

2. When do the six months, in which a local authority must prosecute such an offence, begin to run: as soon as the offence is committed, or continuously, with each day on which the HMO remains unlicensed?

3. How much detail must a local authority give the court, and does the court require, to begin a prosecution?

Housing barrister and HMO specialist Dean Underwood (who represented Waltham Forest LBC in the case) will be discussing the case with me and considering its implications for landlords and also Local Authorities.

This webinar will be particularly relevant to any landlords or agents who deal with lets to sharers, and also to Local Authority staff.

Net proceeds of ticket sales for the this live webinar will be donated to Crisis UK – who really need donations just now for the work they are doing with the homeless, particularly as it looks as if the funding to place homeless people in hotels may not be continued.
I hope you will support us in this.

Once you have paid, you can access the live webinar and also the replay via the link in your emailed receipt. So be very careful to enter your email address correctly when you purchase your ticket. As I will be unable to amend your email address in the system.