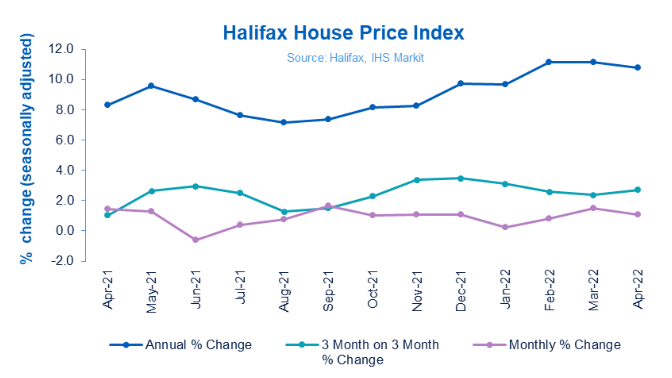 House prices up for the 10th consecutive month but are the brakes about to be applied?

The latest Halifax House Price Index figures indicate House prices increased for the tenth consecutive month by 1.1% in April, the longest run since 2016.

House prices are up £47,568 over the last two years with the average property price reaching £286,079 and Northern Ireland is now the UK area with the strongest house price inflation, but the rate of house price growth is still expected to slow as incomes are squeezed in the cost of living crisis.

Russell Galley, Managing Director, Halifax, said: “The average UK house price rose again in April, up by 1.1%, or £3,078, in the month. This was the 10th consecutive month that property values have increased, the longest run of continuous gains since the end of 2016.

“Housing transactions and mortgage approvals remain above pre-pandemic levels and the continued growth in new buyer enquiries suggests activity will remain heightened in the short-term. The imbalance between supply and demand persists, with an insufficient number of new properties coming onto the market to meet the needs of prospective buyers and strong competition to secure properties driving up prices.

“For now, at least, despite the current economic uncertainty, the strong increases we’ve seen in house prices show little sign of abating. Demand in the housing market remains firm and mortgage servicing costs are relatively stable with fixed-rate deals making up around 80% of mortgages on homes across the industry, protecting many households from the effects of rate rises so far.

“However, the headwinds facing the wider economy cannot be ignored. The house price to income ratio is already at its highest ever level, and with interest rates on the rise and inflation further squeezing household budgets, it remains likely that the rate of house price growth will slow by the end of this year.”

Northern Ireland has overtaken the South West of England as the UK’s strongest performer in terms of annual price house inflation, now at 14.9%, its highest rate of annual growth since December 2007. The average house price is now £182,565 though this is still some way short of the country’s record high of £230,931, set prior to the financial crisis in the summer of 2007.

Wales, so often the area with the UK’s highest rate of growth in recent months, continues to record strong annual house price inflation of 14.2%. The average house price is £214,396 which is yet another all-time high for the country.

House prices also edged up once more in Scotland, reaching a new record of £196,471 with the rate of annual growth now at 8.3%.

The South West of England continues to record the biggest increase, with year-on-year house price growth at 14.8% and the average houseprice now breaking through the £300,000 barrier for the first time (£301,632).

The rate of annual house price inflation in London continues to lag the rest of the UK, with prices now up by 6.2% year-on-year. However, average property values in the capital remain much higher than the rest of the country, with the latest average house price figure of £537,896 a new record for the city.

Build to Rent - A good idea or not?