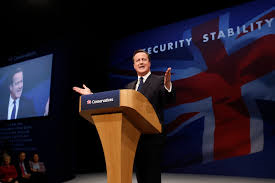 “But for me, there’s one big piece of unfinished business in our economy: housing.

A Greater Britain must mean more families owning a home of their own.

It goes back to those Conservative beliefs: reward for hard work.

More than 150 people a day are moving in thanks to our Help to Buy scheme.

And in our manifesto, we announced a breakthrough policy: extending the Right to Buy to housing association tenants.

Some people said this would be impossible. Housing associations would never stand for it. The legislation would never pass.

Let me tell you something.

Greg Clark, our brilliant Communities Secretary, has secured a deal with housing associations to give their tenants the Right to Buy their home.

That will mean the first tenants can start to buy their homes from next year.

Yes, as we said in our manifesto, 1.3 million to be given the chance to become homeowners. A promise made. A promise kept.

But the challenge is far, far bigger.

When a generation of hardworking men and women in their 20s and 30s are waking up each morning in their childhood bedrooms – that should be a wakeup call for us.

We need a national crusade to get homes built.

And in all these things I’ll be working with a great London Mayoral candidate – and, I hope, soon to be our London Mayor – Zac Goldsmith.

So let’s hear it for the man who for two terms has been Mayor of the greatest capital city on earth: Boris Johnson.

Increasing home ownership means something else.

For years, politicians have been talking about building what they call “affordable homes” – but the phrase was deceptive.

It basically meant homes that were only available to rent. What people want are homes they can actually own.

After all, the officials who prepare the plans for the new homes, the developers who build them, the politicians who talk about them…

…most of these people own the homes they live in.

Don’t they realise other people want what they’ve got – a home of their own?

So today, I can announce a dramatic shift in housing policy in our country.

Those old rules which said to developers: you can build on this site, but only if you build affordable homes for rent…

…we’re replacing them with new rules…

…you can build here, and those affordable homes can be available to buy.

…our party, the Conservative party…

…the party of home ownership in Britain today.”

Termination of agreement with letting agent - I want to be fair