Bank Base Rate Unanimously held at 0.75%

The Bank of England Monetary Policy Committee has voted today unanimously holding the Bank Rate at 0.75% with CPI inflation falling slightly below the medium term target of 2% with a March figure of 1.9%. Inflationary pressure is predicted to fall further during the year as any costs associated with the fall in sterling have now worked their way through the markets and growth in world trade has fallen sharply along with business confidence.

This decision is assuming a smooth transition to new trading relationships with the EU along a mid forecast for disruption.

The Bank of England inflation report chart 1.4 below shows how the current predicted path for interest rates has been revised down to a maximum Base Rate of only 1% by 2022. 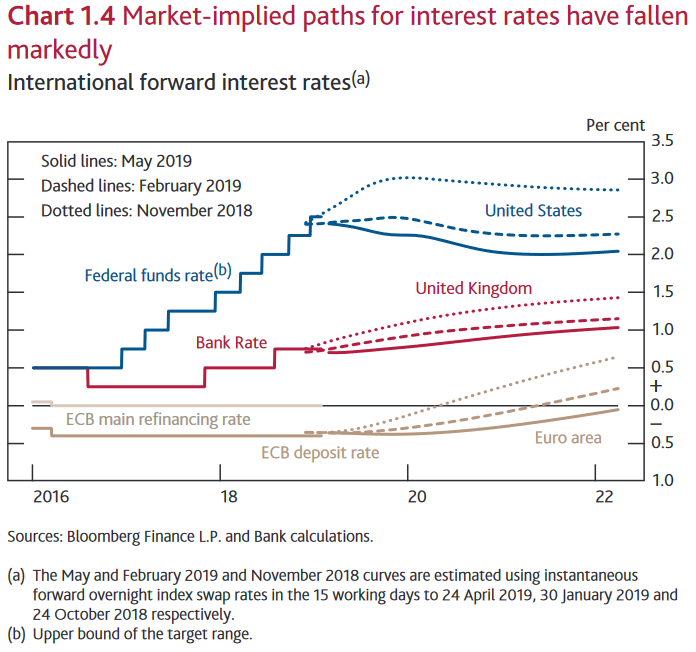 “The MPC has noted previously that UK data could be unusually volatile in the near term, due to shifting expectations about Brexit in financial markets and among households and businesses. GDP is expected to have grown by 0.5% in 2019 Q1, in part reflecting a larger-than-expected boost from companies in the United Kingdom and the European Union building stocks ahead of recent Brexit deadlines. That boost is expected to be temporary, however, and quarterly growth is expected to slow to around 0.2% in Q2. Smoothing through those developments, the underlying pace of GDP growth appears to be slightly stronger than previously anticipated, but marginally below potential. That subdued pace reflects the impact of the slowdown in global growth and ongoing Brexit uncertainties. The latter is having a particularly pronounced impact on business investment, which has been falling for a year. The MPC judges that there is currently a small margin of excess supply in the economy.

In the MPC’s central projection, global growth stabilises around its potential rate and Brexit uncertainties subside gradually. Four-quarter UK GDP growth begins to pick up next year and rises to over 2% by the end of the forecast period. Business investment recovers and household spending continues to support demand growth, sustained by rising real incomes. GDP growth picks up above the subdued pace of potential supply growth, such that excess demand begins to build. Excess demand rises above 1% of potential output by the end of the forecast period, notably higher than in the February Report, reflecting the support to demand provided by lower market interest rates and easier financial conditions more generally.

CPI inflation was 1.9% in March and is expected to be slightly further below the MPC’s 2% target during the first half of the forecast period, largely reflecting lower expected retail energy prices. The labour market remains tight, with the unemployment rate projected to decline to 3½% by the end of the forecast period. Annual pay growth has remained around 3½% and unit labour cost growth has strengthened to rates that are above historical averages. As excess demand emerges, domestic inflationary pressures are expected to firm, such that CPI inflation picks up to above the 2% target in two years’ time and is still rising at the end of the three-year forecast period.

The Committee continues to judge that, were the economy to develop broadly in line with its Inflation Report projections, an ongoing tightening of monetary policy over the forecast period, at a gradual pace and to a limited extent, would be appropriate to return inflation sustainably to the 2% target at a conventional horizon. The MPC judges at this meeting that the current stance of monetary policy is appropriate.

The economic outlook will continue to depend significantly on the nature and timing of EU withdrawal, in particular: the new trading arrangements between the European Union and the United Kingdom; whether the transition to them is abrupt or smooth; and how households, businesses and financial markets respond. The appropriate path of monetary policy will depend on the balance of these effects on demand, supply and the exchange rate. The monetary policy response to Brexit, whatever form it takes, will not be automatic and could be in either direction. The Committee will always act to achieve the 2% inflation target.”

U the Daddy with this info.
If Landlords absorb this, with all the other attacks against us, at least current borrowing, those on trackers, and 5 year fixed, are good prices, to keep borrowing low, which we gonna need to pay out all these fees bestowed upon us.

RLA survey indicates 25.5% of landlords are looking to sell property