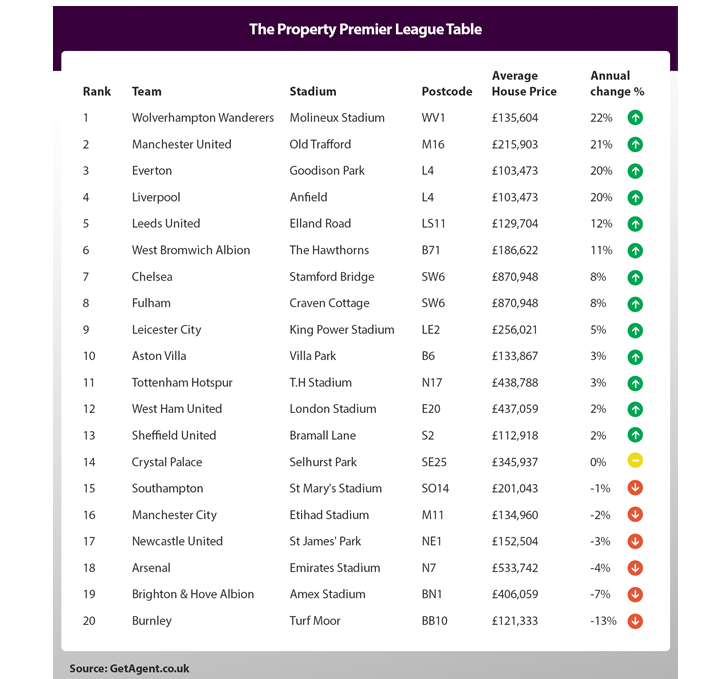 It may seem like it just ended, but the Premier League returns this weekend. While there’s a long road ahead before the champions are crowned, estate agent comparison site, GetAgent.co.uk, has revealed which teams take the top spot for buoyant house price growth. They pulled house price data surrounding every Premier League stadium to look at current house price pedigree as well as the most significant property market improvements since last season.

Chelsea and newly promoted Fulham share the bragging rights, with both Stamford Bridge and Craven Cottage located within the SW6 postcode and home to the highest average house price in the Premier League (£875,361).

Where house price growth is concerned, Wolves are on the best run of form of all teams in the Prem. House prices in the WV1 postcode, home to Molineux, have increased by 22% in the last year; the biggest increase in the league.

Unfortunately, not all newly promoted teams have fared as well. Burnley bounces straight back to the Championship with house prices in Turf Moor’s BB10 postcode falling by -13% in the last year.

“A very alternative Premier League table and one that is unlikely to materialise where sporting prowess is concerned. However, it does demonstrate the diversity of the property market and how high prices don’t necessarily result in positive house price growth.

While London is home to the biggest hitters for overall value, they’ve certainly trailed behind the more affordable locations for price growth since last season. It’s also a pretty lousy time to be a Burnley fan. Despite promotion, the club is home to one of the lowest average house prices and the largest decline over the last year.”