The Bank of England’s Monetary Policy Committee (MPC) today voted unanimously to hold the Bank Base rate at 0.75%.

Volatile data surrounding Brexit uncertainty and corresponding falls in Sterling would mean a reduction in rate could put the Pound under even more pressure and an increase to counter exchange rate related inflation could dampen slowing GDP growth still further. 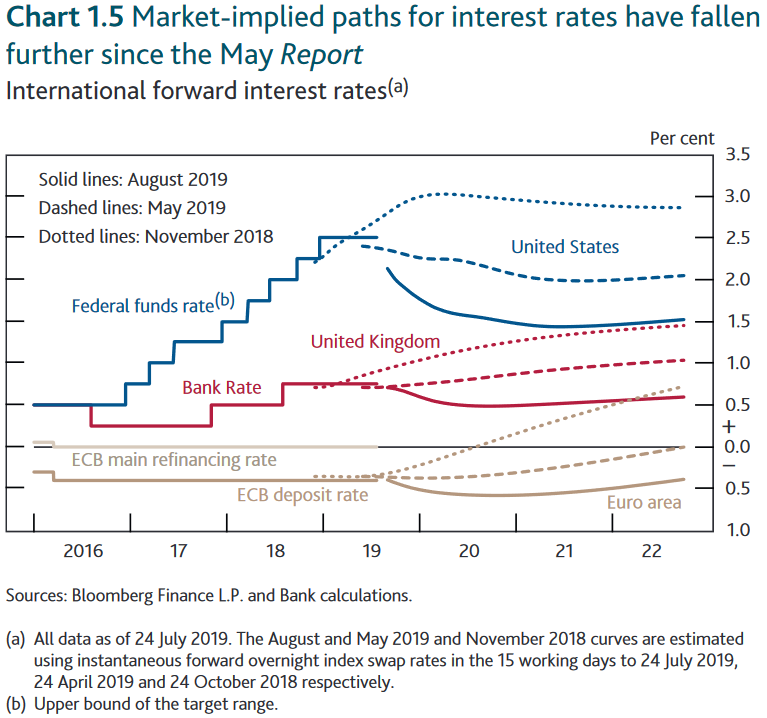 “Since May, global trade tensions have intensified and global activity has remained soft. This has led to a substantial decline in advanced economies’ forward interest rates and a material loosening in financial conditions, including in the United Kingdom. An increase in the perceived likelihood of a no-deal Brexit has further lowered UK interest rates and led to a marked depreciation of the sterling exchange rate.

Brexit-related developments, such as stockbuilding ahead of previous deadlines, are making UK data volatile. After growing by 0.5% in 2019 Q1, GDP is expected to have been flat in Q2, slightly weaker than anticipated in May. Looking through recent volatility, underlying growth appears to have slowed since 2018 to a rate below potential, reflecting both the impact of intensifying Brexit-related uncertainties on business investment and weaker global growth on net trade.  Evidence from companies, up to the middle of July, suggests that uncertainty over the United Kingdom’s future trading relationship with the European Union has become more entrenched. The labour market remains tight. Annual pay growth has been relatively strong.  Consumer spending has remained resilient. CPI inflation was 2.0% in June and core CPI inflation was 1.8%.

The Committee’s updated projections are set out in the accompanying August Inflation Report. They continue to assume a smooth adjustment to the average of a range of possible outcomes for the United Kingdom’s eventual trading relationship with the European Union. In the central projection, conditioned on prevailing asset prices, underlying output growth is subdued in the near term, reflecting more entrenched Brexit uncertainties. This means that a margin of excess supply persists over the first year of the projection. Thereafter, GDP is projected to accelerate to robust growth rates, reflecting a gradual recovery in global growth and firming UK domestic demand growth, driven in large part by a recovery in investment growth as uncertainties dissipate in line with the Brexit conditioning assumption. The acceleration in GDP results in a significant build-up of excess demand, to around 1¾% of potential GDP by the end of the forecast period. After falling in the near term, CPI inflation is projected to rise above the 2% target, as building excess demand leads to firmer domestic inflationary pressures. Conditioned on prevailing asset prices, CPI inflation reaches 2.4% by the end of the three-year forecast period.

These projections are affected by an inconsistency between the smooth Brexit conditioning assumption underpinning the forecast and the prevailing market asset prices on which the forecasts are also conditioned. These asset prices reflect market participants’ perceptions of the likelihood and consequences of a no-deal Brexit.  If, as assumed, Brexit proceeds smoothly to some form of deal, market interest rates would likely rise and the sterling exchange rate would likely appreciate. A more consistent forecast would therefore have somewhat lower paths for GDP growth and CPI inflation.

Increased uncertainty about the nature of EU withdrawal means that the economy could follow a wide range of paths over coming years. The appropriate path of monetary policy will depend on the balance of the effects of Brexit on demand, supply and the exchange rate. The monetary policy response to Brexit, whatever form it takes, will not be automatic and could be in either direction. In all circumstances, the Committee will set monetary policy appropriately to achieve the 2% inflation target.

The MPC judges at this meeting that the existing stance of monetary policy is appropriate.

Assuming a smooth Brexit and some recovery in global growth, a significant margin of excess demand is likely to build in the medium term. Were that to occur, the Committee judges that increases in interest rates, at a gradual pace and to a limited extent, would be appropriate to return inflation sustainably to the 2% target.”

As ever, like to read your verdict on this.
I reckon if anything, we may be in for a fall within the next 9 months.