The Consumer Price Index CPI inflation figures for October show a year on year fall to 2.2% from 2.7% in September as released today by the Office for National Statistics (ONS).

This surprise fall means that the basket of goods and services measured under CPI which cost £100.00 in October last year would now cost £102.20. We are also now much closer to the Bank of England’s medium term target inflation rate of 2%, which inflation has been above since December 2009.

The Bank of England’s new forward guidance also indicated that it would not consider an increase in interest rates unless unemployment was also below 7%. We will know more when the Bank publishes it’s latest forecast tomorrow.

Although not directly related the European Central Bank also cut it’s rate from 0.5% to an all time low of 0.25% last week in an effort to alleviate fears of deflation (price falls) across Europe with inflation now running at 0.7% against a target of 2% as in the UK. A stalling European inflation rate will have some downward pressure on UK rates as they are our largest and closest trading partner.

The largest contributing sectors to the fall in CPI inflation came from transport (notably motor fuels) falling 1.5% and education (tuition fees) increasing by 8.2% down from 19.1% last year according to ONS figures. Falling transport prices may also have affected prices at supermarkets with food inflation falling from 4.8% to 4.3%.

However it is not all good news for inflation figures as the recent large price increases by energy suppliers has yet to take effect on, but economist are not predicting the Bank Base rate to be seriously reviewed even after the recent economic upturn until late 2015. 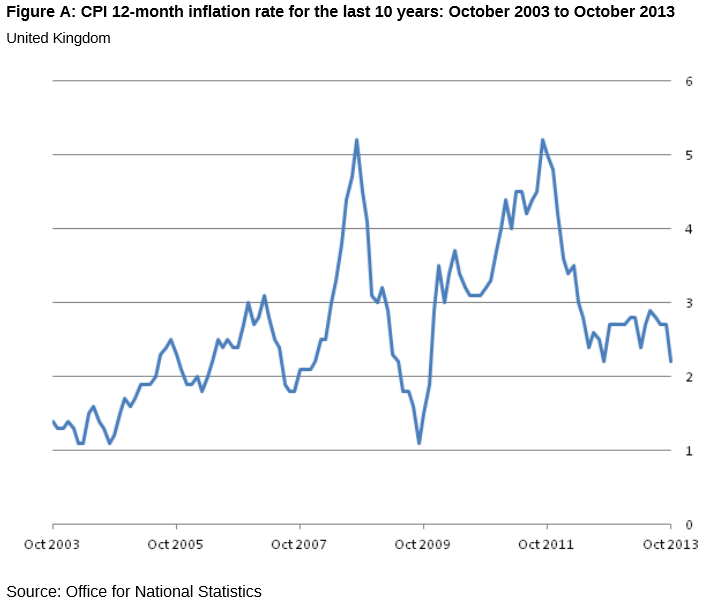 Do you think the Bank of England have lost credibility in dealing with the economy? That is an interesting question and one raised at the regional Quarterly Inflation Report by The Bank of England themselves. END_OF_DOCUMENT_TOKEN_TO_BE_REPLACED