Homes selling at auction in May sold for around 80% of the price of an average home.

The latest figures from auction monitor EI Group show 2,034 properties changed hands for an average price of £128,466 in May 2012. END_OF_DOCUMENT_TOKEN_TO_BE_REPLACED

Homes under the hammer are still knocking up strong sales with almost 2,500 properties changing hands for £282 million.

Around 70% of all homes up for auction were sold, according to the latest UK auction statistics for September from EI Group.

The number of homes changing ownership is to continuing to fall according to analysis by an auction sales monitor.

Residential property transactions have steadily decreased against those in the corresponding quarter for almost a year.

The Essential Information Group (EIG) took Land Registry figures for quarterly property transactions back to the third quarter of 2009 and compared the figures for 12 months later to produce the results in the graph below. 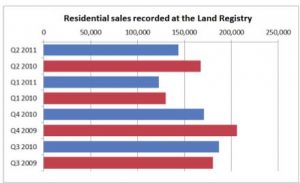 The blue bars represent transactions over the past four quarters, while the red bars show those for the same quarter a year earlier.

Land Registry transactions not only include home sales, but those gifted, transferred for no cash or inherited in England and Wales.

“In each of the past three quarters a decrease in the number of residential transactions is evident when compared with the previous corresponding quarter.”

EIG explains this is the fifth month in a row auction sales have improved year-on-year.

“ August is a quiet month in the auction calendar, with only 47 auctions held as opposed to the average of 120. However recent trends show that August’s figures are indicative of how the auction market is faring,” said Sandeman.

The number of August auction sales shows a 12 per cent year-on-year increase in residential sales.

Property Auction Due Diligence & How Much To Bid Latest Articles, Property Investment Strategies

I have purchased some of my best property deals at auctions but it is not for the faint hearted.

When buying at an auction these are the major considerations:

Auction purchases, where do I start with due diligence? Guest Articles, Latest Articles

Sam Collett is a property developer, owner of Gorgeous Homes, an avid property auction buyer and Winner of the Primelocation.com Blog Awards 2010-11.  In this article Sam shares her top tips on buying property at auction.

END_OF_DOCUMENT_TOKEN_TO_BE_REPLACED

Property investors may find the next few months an ideal time to buy reasonably priced property as buyer confidence slips to an 18-month low.

Estate agents and surveyors are reporting buyers are saying they will put off any purchase decisions until the spring – which leaves sellers with little option other than to accept a reduced price if they have to sell. END_OF_DOCUMENT_TOKEN_TO_BE_REPLACED