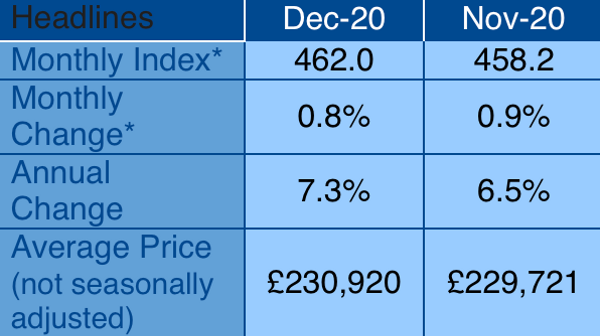 The Nationwide House Price index for December 2020 is indicating UK price inflation of 7.3% for the year and 0.8% for the month with the average house price now standing at £230,920.

All areas of the UK saw a pickup in house price growth rates in quarter 4, with East Midlands the strongest region.

Commenting on the figures, Robert Gardner, Nationwide’s Chief Economist, said: “Annual house price growth accelerated further in December, reaching a six-year high of 7.3%, up from 6.5% in the previous month. Prices rose by 0.8% month-on-month, after taking account of seasonal effects, following a 0.9% rise in November. House prices ended the year 5.3% above the level prevailing in March, when the pandemic struck the UK.

“The resilience seen in recent quarters seemed unlikely at the start of the pandemic. Indeed, housing market activity almost ground to a complete halt during the first lockdown as the wider economy shrank by an unprecedented 26%, but, since then, housing demand has been buoyed by a raft of policy measures and changing preferences in the wake of the pandemic.

“The furlough and Self Employment Income Support schemes provided vital support for the labour market, while a host of measures helped to keep down the cost of borrowing and keep the supply of credit flowing. The stamp duty holiday also stimulated housing demand, by bringing forward peoples’ home-moving plans. Lenders also responded by offering payment holidays to borrowers impacted by the pandemic, helping people stay in their homes rather than potentially being forced to sell.

“The pandemic itself also boosted activity, as life in lockdown and changes to working patterns led many to re-evaluate their housing needs. Our research earlier this year indicated increased demand for less densely populated locations and different property types. This helps to explain why detached properties have seen greater price gains in recent quarters, while flats have underperformed (as illustrated in the chart in the attached PDF).

“Housing market conditions have remained robust in recent months, even as the wider economic recovery lost momentum and the UK economy faced the prospect of further lockdowns and continued uncertainty about the UK’s future international trading relationships.

“The outlook remains highly uncertain. Much will depend on how the pandemic and the measures to contain it evolve as well as the efficacy of policy measures implemented to limit the damage to the wider economy.

“However, housing market activity is likely to slow in the coming quarters, perhaps sharply, if the labour market weakens as most analysts expect, especially once the stamp duty holiday expires at the end of March.

Annual price growth picks up across all regions in Q4

“All regions in England saw prices rise over the year, within a fairly narrow range of 5% to 9%. The Outer South East region, which includes cities such as Brighton, Southampton and Oxford, saw a significant change in fortunes – prices were up 8% in 2020, following a 1% decline in 2019.

“The neighbouring Outer Metropolitan region, which includes places such as Slough, Guildford, Crawley and Chelmsford, was the weakest performing English region, but still saw prices rise by 5.6% over the year. Meanwhile, London saw a 6.2% increase, with average prices reaching their highest ever at £486,562.

“Turning to the other home nations, Wales saw prices rise by 6.6%, whilst Northern Ireland saw a 5.9% increase. Scotland saw the weakest growth of the home nations, with prices only up 3.2% in 2020. This contrasts with 2019, where Scotland ended the year on top, with growth of 2.8%.”

Please note that these figures are for the three months to December, therefore will show a different UK average price and annual percentage change to our monthly house price statistics.

Investor or Developer - How would HMRC treat me?