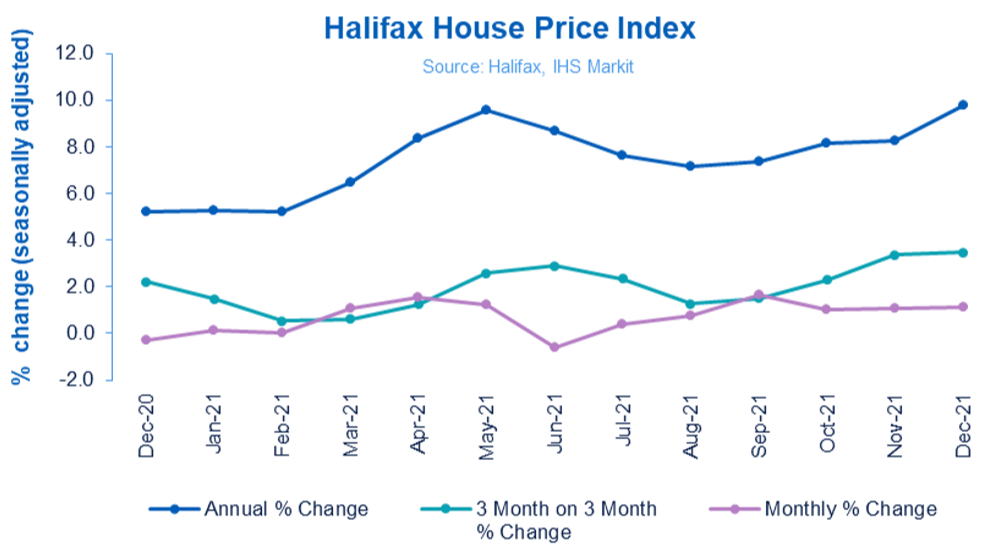 The December Halifax House Price Index has just been released, with the average UK property price now hitting £276,091. House prices increased by over £24,500 in 2021, the largest annual cash rise since March 2003.

However, they are expecting House price inflation to slow in 2022.

Wales remains by far the strongest performing nation or region in the UK with annual house price inflation of 14.5%, taking the average house price to £205,579. However, the rate of increase is slightly down from the 14.8% rise recorded in November.

In England, the North West was the strongest performing region (11.8%), followed by the South West.

Despite registering a strong quarterly rise in prices (2.9%), up from 1.1% in November, London remains by far the weakest performing for annual inflation (2.1%).

Russell Galley, Managing Director, Halifax, said: “UK house prices climbed again in December for the sixth consecutive month in a row, up 1.1%. The average price for a property now stands at £276,091, an increase of more than £24,500 compared to December 2020, marking the strongest year-on-year cash rise since March 2003.

“The housing market defied expectations in 2021, with quarterly growth reaching 3.5% in December, a level not seen since November 2006. In 2021 we saw the average house price reach new record highs on eight occasions, despite the UK being subject to a ‘lockdown’ for much of the first six months of the year.

“The lack of spending opportunities afforded to people while restrictions were in place helped boost household cash reserves. This factor, alongside the Stamp Duty holiday and the race for space as a result of homeworking, will have encouraged buyers to bring forward home purchases they’d maybe planned for this year. The extension of the Government’s job and income support schemes also supported the labour market and may have given some households the confidence to proceed with purchases.

“A lack of available homes for sale, and historically low mortgage rates, have also helped drive annual house price inflation to 9.8%, its highest level since July 2007.

“Looking ahead, the prospect that interest rates may rise further this year to tackle rising inflation and increasing pressures on household budgets suggest house price growth will slow considerably. Our expectation is that house prices will maintain their current strong levels, but that growth relative to the last two years will be at a slower pace. However, there are many variables which could push house prices either way, depending on how the pandemic continues to impact the economic environment.”

Can I make a stand by stop paying ground rent or service charge?