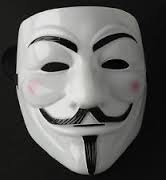 ‘The Million Mask March’, the world’s largest protest by the most influential group in the world – apparently. That’s how “hacktivists” Anonymous have not-so-modestly positioned their campaign anyway!

Anonymous is a self-styled international network of “hacktivists” and anti-establishment protesters, who, according to the Telegraph, are linked to cyber-attacks against governments and corporations. They are also associated with the Occupy! movement and Wikileaks. Most recognisably, many of their members and supporters are given to wearing the Guy Fawkes style masks popularised in the cult film “V”.

Most worryingly, if their Occupiers Tactical Manual (http://www.ukanonymousevents.com/tactical-manuals.html) is anything to go by, peaceful protest is not on the agenda. This manual clearly informs the reader that: “the tactics in this book are illegal and you must accept that in using these tactics you could face court proceeding and possibly jail.”

Highlights from the manual include tips on how to arrest police with their own handcuffs, followed by the suggestion to then strip the police officer of all clothing, paint them with colourful body paint or dye that won’t come off for months, photograph them and share the images on social media.

Last year, the Million Mask March took place in over 400 countries and now Anonymous is again urging its supporters to dust off their Guy Fawkes or superheroes masks and organise a march in their country. London is always a large focus of their attention.

The details of this year’s march in London are slightly sketchy, with various Anonymous sites distributing conflicting data.

Although the exact location is hard to predict, we’ve come across a source of information giving the location as Trafalgar Square from 6pm until midnight and another source which gives the meeting point as the Ecuadorian Embassy. The latter would appear to be more of a protest for the freeing of Julian Assange, founder of Wikileaks, rather than an actual march.

It may be that the exact details are being kept vague to confuse the authorities, or perhaps it’s just bad organisation!

Regardless of the ambiguity surrounding the exact location of the march, what we do know is that a large protester and occupier group will be targeting central London on 5th November 2015: landlords in the area should take precautionary steps to secure their empty property and dissuade trespassers, especially if they’re away.

– Is there an option to keep your building occupied? Options could be short-term leases and property guardians (people occupying the premises on a very short-term contract for a minimal rent, in exchange for protecting the property from squatters, vandalism and general deterioration).

– Increase the security of your building by introducing CCTV, alarms, security doors or screens, motion-detection lighting or security guards.

– Check regularly for any indications that an entry may have been attempted.

– Make your property appear less attractive – remove any valuable items (internally and externally) including machinery and disconnect any utilities such as power and water.

– It is also good practice to check your insurance policy – are you covered for intrusions or damage to your property?

If you would like further advice about how to make your property secure or need an eviction please contact our Rapid Response Team.

Our Rapid Response Eviction Team are highly experienced and have an excellent reputation and can remove squatters quickly and effectively under Common Law or High Court writ. The team will be ready and on standby throughout.

To contact our team or request our security services brochure please complete the form below.

Cash or Mortgage which is better?